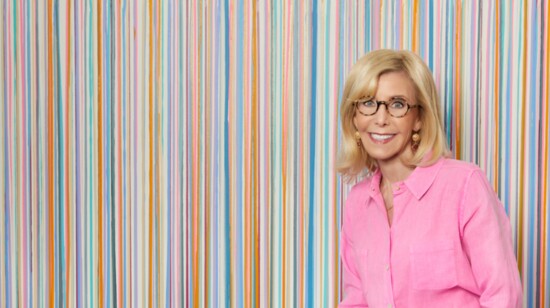 Marthann Masterson shares her thoughts on her art, inspiration, and the joy of finding her passion.

They say that if you do what you love, you’ll never work a day in your life – and Marthann Masterson is fortunate in that sense. The native Houstonian is currently on her third career, this time as an artist, but still talks fondly of her first two careers when she worked as a chef and television personality. During her time as a chef and caterer, she cooked for royalty from around the world, diplomats, and headliners like Mick Jagger and The Rolling Stones. After her television show, which aired primarily in the Midwest and east coast markets, ended, she moved back to Houston and became interested in art. “I was on a mission to learn about art,” says Masterson. “I took lessons with my husband in my kitchen, and my teacher told me that I should go to art school because I had talent - that was twenty years ago.”

Masterson, a contemporary artist, is best known for her vivid drip paintings. The large, vibrant paintings are technical and richly layered - each with between 60 to 100 layers of paint each. Taking about two to three weeks to complete, Masterson’s drip paintings are commissioned by private patrons as well as local hotels and restaurants. Because each layer of paint takes about 30 minutes to dry, Masterson works on between two to five paintings at a time in her large Sawyer Yards studio.

Well-versed in technical painting and realism, Masterson began painting abstracts relatively recently. “Drip paintings are very technical, but abstract paintings come from the inside,” says the artist. “I thought abstract art would be easy, but it has taken me about two years to have one that I think is presentable. I don’t enjoy making the same type of art all the time; as an artist, I like to be able to create different types.”

A frequenter of museums and art galleries, Masterson finds inspiration looking at art and taking in both the technical and emotional aspects of other artist’s work. She also credits working in a community of over 300 artists with providing constant inspiration and feedback. “It is such a privilege to come into a beautiful, light space with wonderful colors, so it is hard not to be inspired. Art is a wonderful way to spend a day, and it is definitely my passion.”

Marthann Masterson’s work is available at the following Houston locations:

The Silos on Sawyer