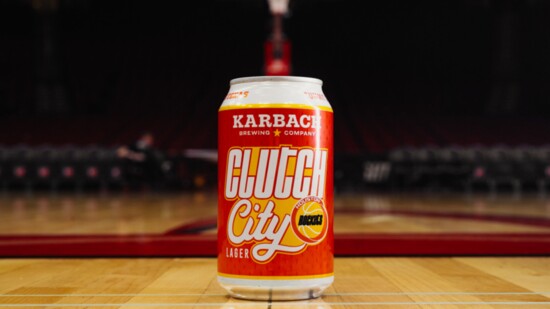 Catch up with Mario Elie and his collaboration with Karbach Brewing and find out what's new with Johnny Carrabba.

Already known for their hugely successful sports collaborations, Karbach Brewing unveiled their latest team up, Clutch City Lager, at the beginning of the 2021-2022 Houston Rockets basketball season. Joining best-selling Crawford Bock, a nod to the Houston Astros, and 12th Man Lager, a collaboration with the Texas A&M University Aggies, the beer is an American-style lager (4%ABV).

Clutch City refers to Houston's nickname after the Houston Rockets won the 1994 and 1995 NBA Championships. Featuring a classic Houston Rockets logo and the mustard yellow and ketchup red colors of that era, the beer is a compliment to the legacy of the team. Karbach teamed up with famed players from that time frame, including Robert Horry, Vernon Maxwell, and Mario Elie. "Every time I see Clutch City, it brings back great memories. This mustard and red are just amazing. I look at this can, and memories instantly come back," says former guard and forward for the Houston Rockets, Mario Elie. "When you mention Clutch City, I perk up because I know I was part of that Clutch City group."

Like several other Karbach brews, there is a charity component to Clutch City Lager. A portion of the proceeds goes to the Clutch City Foundation, an umbrella organization for all the Rocket's community initiatives. The foundation's mission is to make a difference in the lives of those less fortunate - especially children through education, grassroots basketball, and outreach.  no

"The most important thing is that the lager is very good, and for it to be called Clutch City knowing that a lot of us were a part of that, including our city, and the great fans. I remember those days…when you couldn't get a seat in the house," says Elie. As for the taste, it is a crisp, clean lager easily paired with grilled chicken, a seafood dinner, or stadium treats at a game. "I sampled it before it came out, and now I see many people drinking it at the games. When I go get a beverage at the game, they have the cool Clutch City Lager cups, so I see a lot of people drinking them. It's a smooth taste; it's clean - nice and fresh."

The day after Christmas in 1986, Johnny Carrabba and his uncle Damian Mandola opened the doors to their famed Original Carrabba’s on Kirby Drive. They didn’t have enough money to put cash in the till, but they borrowed funds from Johnny’s father and had a successful debut allowing for a second location at South Voss and Woodway seven years later. Fast forward three decades, and not only is the Carrabba name synonymous with Italian food, but it is also the name behind a restaurant dynasty with over 200 Carrabba’s Italian Grills worldwide. Second in scale only to Olive Garden, the restaurant chain is owned by Bloomin’ Brands, the conglomerate behind notable eateries such as Fleming’s Prime Steakhouse, Outback, and Bonefish Grill.

Although the two original restaurants are still family-owned and operated, Johnny is not involved in the day-to-day business of the chain restaurants but remains a brand ambassador. In the nearly forty years since the Original Carrabba’s opened, the restaurateur has been involved in several concepts, most notably Mia’s Table, a casual American food eatery named after his daughter and Grace’s, a tribute to his grandmother Grace Mandola who inspired him in the kitchen.

One of Cararabba’s main priorities is keeping his nine restaurants relevant in Houston’s dining scene. In addition to upgrading the menus and staying relevant on social media, Carrabba focuses on anticipating his customer’s needs. He ramped up the car-side carryout program during the pandemic, which remains successful today. He also focuses on his facilities, ensuring they are up to date and well maintained, saying, “Customers and guests notice when we care for our facilities. Carrabba’s on Voss went through a major remodel just four years ago. Carrabba’s on Kirby has an entirely new building in 2014.”

The native Houstonian, who grew up on the East End, also credits employee retention as the key to his company’s success. “I am fortunate to have a lot of longevity with my employees. You have to have generational employees to have a generational company,” says the restaurateur. “We have many employees now whose young adult children are working for our company. I couldn’t do that if I had a lot of turnover. We concentrate on executing our fundamentals and staying focused on what got us to where we are today.”