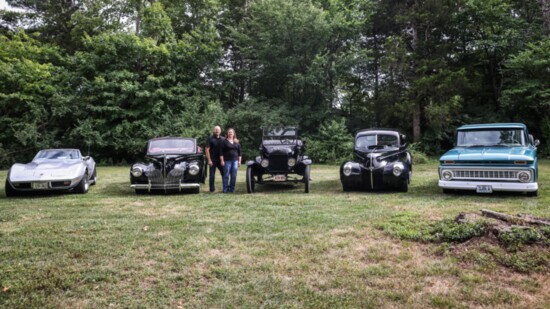 Sit down for a chat with Courtney Springer and it becomes abundantly clear that his love of classic cars and the process of restoring them runs much deeper than simply being a hobby. His eyes light up when he shares where his love of old cars began, with his grandpa and the Ford Model T and Model A cars that he restored with his own two hands. His grandparents George & Edith Goebel were even featured in their local newspaper alongside the five cars. The passion continued to grow from there, with his father and uncle sharing an appreciation for restoring old cars. Courtney shares his fondest memories of summers spent in the rural Nebraska farming community and of the old barn that housed the car collection. “One day my uncle said ‘well, if you want to drive one of them, I’ll get it going for you’ and so he did, and I spent my summer cruising around that small town learning to drive in a 23 Model T” he laughs. He explains that it was a difficult car to master and quite the task for a new driver. He shares “they are not very intuitive to drive, the pedals are opposite that of a normal vehicle and you have to manually tune in the carburetor. For a first car it was really challenging and it forced you to learn all of the parts of the automobile because of course, nothing was computerized.”

When Courtney turned sixteen he convinced his dad to let him get his own project car, a 69 Mustang that came complete with a second car, known as the parts car. “The day of my birthday, my dad just happened to be hosting a prayer group meeting at our house and I was so excited to take it for a ride that I jumped in and forgot to even put on shoes! My older brother Brian joined me for the ride and we found out about three miles down the road that the gas gauge didn’t work- when we ran out of gas. I had to walk the three miles back, barefoot, while Brian decided to wait with the car” he laughs. He has many special memories like this with his brother and their shared bond “he taught me so many things about cars” he says with a smile, which is made all the sweeter now, as he lost his brother at an early age.

Courtney’s current collection includes his grandfather's original cars as well as a fully restored 40 Lincoln Zephyr convertible, a 48 GMC truck, a 63 C-10 Truck StepSide and a 74 Corvette Convertible to name just a few. Explaining the restoration process of the cars, he humbly credits much of his knowledge to his friend Darren Crozier, as well as Talents Hot Rod Shop & Don Kite Interiors. “They got me highly involved in doing the work myself, so I got to really touch every piece of the vehicle” he shares. “They gave me the confidence to do things now that I never would have tried on my own before” he says. Courtney says the cars have been a real source of connection to his community, his church, and his friends. He shares that he has loaned his cars to friends for their weddings, put on car shows to support youth trips, and acquired many good friendships from the car shows he has attended. He shares “each time I work on one of the cars and reflect upon the fact that my grandpa once touched this exact part- and we are connected in that way- well, it’s just something special knowing that they are still with me.”