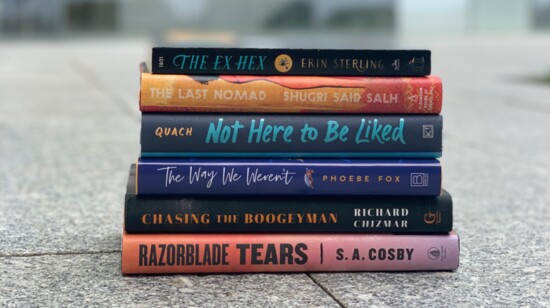 It is hard to believe it’s already fall yet again! As much as I love reading poolside in the summer, I prefer fall weather and reading under a cozy blanket. Football, falling leaves and spooky reads are some of my favorite things!  If you are looking for more book recommendations be sure to follow my Instagram account at @downtogetthefictionon. I review every book I read within my monthly wrap-ups and have lots of giveaway opportunities which is great if you are hoping to expand your book collection without making a dent in your Pumpkin Spice Latte budget! Whether you’re looking for something light or something spooky, I’ve selected a wide range of genres from nonfiction to young adult this month.  I hope you find something on this list that you love!

Vivi is a normal teenage witch who casts a hex on her gorgeous foreign exchange student beau, Rhys, when he breaks her heart. As the years pass, Vivi is a successful professor at her alma mater, but she never forgets that one summer they spent together even though she ended up crying in a bathtub casting a silly spell on her ex. When Rhys returns to Graves Glen nine years later, the town along with Vivi are sent off kilter. Could her spell actually have worked and is now causing havoc on her once quiet town? Together they must save the town from her break-up curse, but will working together cause love to brew once again? The Ex Hex is a fantastic, steamy witchy romance that is perfect for the spooky fall vibes.

Marcie Malone has a loving husband, a wonderful job and happy life in Georgia. Herman Flint is a self-reliant man who seemingly appreciates his solitude on beach in Florida. When Marcie suffers an unimaginable loss, she finds herself alone and on a stranger’s couch. Herman reluctantly lets Marcie into his house, but there’s not a chance he’s going to let this mess into his life. When they start to pick away at one another, this unlikely pair begins to open up to someone new while starting to look within themselves. THE WAY WE WEREN’T is a story of finding yourself, picking up after your mistakes and learning to live again. I loved how imperfect the characters were but also how much you wanted to root for their happiness. Heartwarming and emotional, this book will give you all the feels.

Ike is an ex-con who’s been living the straight and narrow for 15 years. He’s got a pretty good life even though he’s mostly estranged from his son Isiah, son-in-law Derek, and their daughter. Buddy Lee, Derek’s father, is a criminal who doesn’t shy away from conflict. When Buddy and Ike’s sons are murdered, leaving their shared granddaughter an orphan, they find they have more in common than their regret over their strained relationships with their sons. As they hatch a plan to find and bring their sons’ killers to justice, they embark on a high-octane adventure that challenges them both physically and emotionally. If you love action movies, this book is for you! RAZORBLADE TEARS is filled with so many tense, heart pounding scenes that it’s both a page turner and a tear jerker.

Young Adult – NOT HERE TO BE LIKED by Michelle Quach

Eliza Quan is the most qualified candidate on the ballot to run her school paper and the only candidate running. That is, until rookie writer and former baseball star, Len DiMartile, enters the race, and the election turns into a popularity contest. Filled with anger she pens a private essay that becomes a public feminist movement when someone publishes her essay for the entire school to read. Now she and Len have to work together on the paper, and they both start to realize their rival is more complex than it seems. NOT HERE TO BE LIKED is a great story that balances humorous and serious topics in a fantastic manner. Eliza isn’t your normal female teen heroine, but that’s part of what makes this book so clever.

Non-fiction – THE LAST NOMAD: Coming of Age in the Somali Desert by Shugri Said Salh

Shugri Said Salh is the last nomad in her family’s long history of nomadic life. As the “throw away” daughter in her family, she was sent to live with her nomadic grandmother at the age of 6. Living and surviving in the desert taught Shugri about tradition, survival, being resourceful and instilled a sense of confidence she relies on for the rest of her upbringing. When she’s brought back to life in the city with her family, Shugri often struggles with finding her identity as city life is a drastic contrast to her nomadic past. Never forgetting the lessons she learned, we’re taken on a journey through her life as she travels within Somalia and beyond. This telling memoir is an extremely inspiring story. THE LAST NOMAD will give you insight into a world quite possibly very unlike your own which is such a generous gift from the author.

In the 1980s a serial killer is on the loose in Maryland. When recent college grad and horror enthusiast, Richard Chizmar, returns to spend the summer at his parents’ house, he starts to closely follow what’s happening in his town. Chizmar quickly becomes more involved as he begins to investigate and write about “The Boogeyman.” As time passes and more victims are found, Richard falls deeper into this story. This is a fabulous work of fiction that I kept having to remind myself was in fact not a true crime novel. Chizmar takes experiences and places from his childhood and weaves them throughout the book making the story seem eerily real.