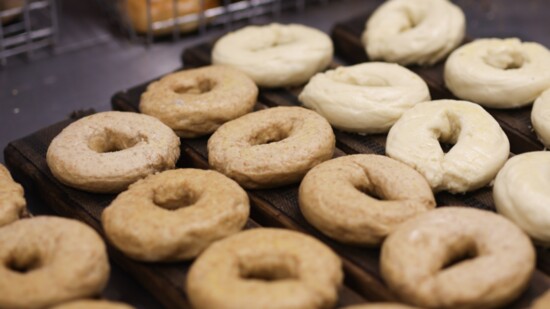 Meshuggah Bagels is bringing New York to Kansas City one bagel at a time. With their secret mix of artisan flour, yeast, malt, sugar and salt, they say they’ve painstakingly perfected their recipe to the point that even a New Yorker would swear they were biting into a piece of home.

Owners Pete and Janna Linde came from different bagel backgrounds, but both shared a love for the taste of the real deal.

“Meshuggah means ‘crazy’ in Yiddish,” Pete says. “This is mostly a reference to Janna’s first reaction to a real bagel—crazy delicious! It also is a good adjective for the life we have lived since opening almost six years ago. I was born in NYC and raised in New Jersey in a Jewish household in a town with a wide variety of cultures, religions and nationalities. I spent weekends visiting grandparents in Manhattan and Brooklyn, and generally growing up as a New Yorker. Bagels were always a part of normal life, with mom and pop bagel shops seemingly everywhere. My earliest memories include going to the store with my father and buying a dozen, some cream cheese, and a pack of nova salmon on the weekends.

“As a teenager and in college at Columbia in Manhattan, bagels were the ultimate cheap sustenance: a snack after school, a breakfast, lunch or dinner, or a late night snack. In NYC, some bagel stores stay open 24 hours. They were a part of life that you figured were available everywhere in America until moving away and finding they weren’t. I used to joke with Janna that somebody needed to open a real NY bagel place in KC so we can stop filling our carry-on bags with bagels every time we visit family in New York—we’d bring four dozen back and fill every inch of our freezer. I was working at Ford and thought if nobody does this by the time I retire, maybe we will do it.”

“Born and raised in Independence, I didn’t quite understand my need for a real bagel,” Janna says. “Having never tasted the real thing, bagels to me were round bread in the grocery store next to the burger buns and Sara Lee cinnamon toast. Why would anyone make a special trip to a special store for one of those things? That is, until I had a bite of a ‘real’ bagel with whitefish salad on a trip together in New York. I said, ‘Oh my goodness, what is this?! These are crazy delicious!’ A few bagels and a few months later, the idea of Meshuggah Bagels was born.

“I was ready for a career change as an executive at a global produce company a few years before Pete was retirement-eligible, so we started doing the groundwork to build a wholesale bagel company to take advantage of my contacts in the grocery industry. We found a location and started construction after purchasing bagel ovens and equipment in a state where genuine bagels did not exist. Neither of us had ever successfully baked a bagel in our lives—it took about 20 recipe revisions before the bagels were even recognizable, and another 53 adjustments before we had the formula that became a Meshuggah Bagel.

“With the bakery complete and recipe finalized, we found ourselves without any wholesale customers in November of 2015. Every retailer was in the middle of the holiday season, six months before they would be adding any new products. We noticed an article in The Pitch about the Jewish Federation’s Bagel Bash on Christmas Eve—a party for the Jewish college-aged kids of KC, with bagel in the name! Janna convinced the organizer to introduce Meshuggah Bagels as the featured food. It was a whirlwind week of certifying the bakery as kosher and learning how to bake 350 bagels for the first time. Our social media exploded, and three months later we were open on 39th street in Westport.”

“The only thing different between what we do and what was done 300 years ago in Eastern Europe is using natural gas to fire our ovens instead of wood or coal. We use the best ingredients, never add any preservatives, and allow our dough to proof for at least 24 hours before baking. The bagels are boiled before baking, topped and set on cedar planks with burlap strapping for the early portion of the bake, then flipped onto baking stones for finishing.”

Their menu offers a wide variety of sweet and savory bagels and schmears along with the finest smoked seafood, including salmon, whitefish salad, and salty lox. Their bagels include poppy seed, onion, garlic, salt, rye, Bialy, whole wheat, cinnamon raisin and chocolate chip, with the most popular being their everything bagel followed closely by plain and sesame. Top with a savory schmear, like plain, rosemary garlic, garlic dill, toasted everything, garlic and herb, veggie, scallion, jalapeño, or top it with a sweet schmear, like strawberry, blueberry or Oreo cheesecake.