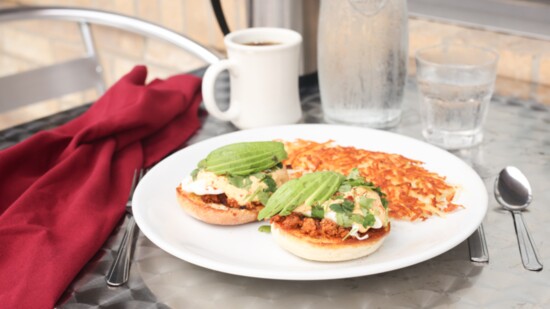 Breakfast favorites with a south of the border flair

Just off State Line Road in Leawood is a one-of-a-kind hidden gem, a restaurant known for serving a diverse menu featuring breakfast favorites along with their signature “south of the border flair.” In July of 2018, when Luis Ornelas opened The Breakfast Spot, his goal was simple—to share his love of food and balance it with his love of family.

Luis spent many years working two jobs in the restaurant business to provide for his wife and four children. “There were just never enough hours in the day,” he says. “I was working long hours and missing out on family,”

He began to entertain the idea of opening up his own restaurant and blending his two favorites—breakfast food and Mexican cuisine. “I have always liked to cook since I was very little,” he shares. “I used to watch cooking shows and make up these little menus for my family and I even charged them money,” he says with a laugh. So it came as no surprise to his family that owning a restaurant was his dream.

As fate would have it, another restaurant went out of business and was selling off their inventory, and his wife Jennifer encouraged him to purchase it as a start to the dream he had been contemplating. After two years of collecting and storing all the things he would need to open his restaurant, it was his wife who again gave him the nudge.

“She was getting tired of all of these appliances and things being stored all around our house,” he shares with a laugh. “Things started out really good, we were doing well. Then Covid came, and all of our staff left, and people stopped coming in, and we just didn’t know what things were going to look like going forward,” he says.

He was about to add on to the restaurant with an expansion when he cautiously decided to hold off. “Things were tough, we didn’t have enough business, so we had to go down to only being open three days a week. We began to focus on to-go dining, our business was primarily take-out, and we were able to get by with limited staff.”

Things are beginning to look up. Luis says that people are slowly beginning to frequent the restaurant again, and they are now back to being open seven days a week. “It’s like hitting the reset button,” he says. “Our business is now about 50 percent dine-in and 50 percent to-go,” he shares. Two months ago the expansion was finally added to provide more seating and an additional space that he plans to lease as a party venue for larger gatherings, even installing a contemporary garage door that can be used to separate the two spaces. It is a modern space with a uniquely ethnic sentiment.

How about the food? “It’s just the best, so flavorful,” says one guest.

The menu has a wonderful balance of traditional breakfast favorites such as omelets, frittatas, skillets and biscuits & gravy, as well as healthy alternatives like the Power Banana Split all made in house. The lunch menu is equally as appetizing with delectable sandwiches, wraps and salads along with crowd favorites like burgers and tantalizing desserts like Churros Con Chocolate. Of course, their south of the border menu can't be beat featuring tacos, burritos and enchiladas. Once you’ve tried The Breakfast Spot, you are sure to become a regular. Visit The Breakfast Spot at 13164 State Line Road, Leawood, KS 66209 and order to-go online at thebspotkc.com.