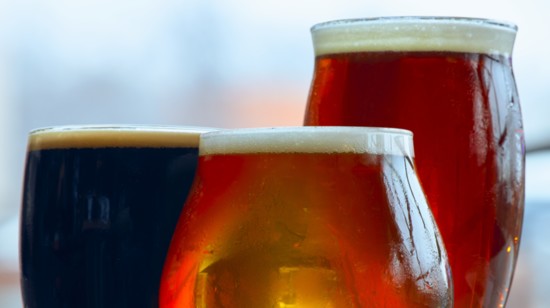 Like many inspirational, American start-up stories, the concept for the Red Crow Brewing Company was born from a desire to do more. When Mistie and Chris Roberts decided to abandon the disenchanting 9-to-5 in exchange for something that lifted their spirits, they couldn’t have known how quickly their passion would take flight.

The roots of the brewery can be traced back to 2008 in Mistie and Chris’s garage. It was a pastime that began as a curiosity but soon became a deeply fulfilling aspect of their time with family and friends. Because Chris and Mistie were so inspired by friends and family in their homebrewing process, the two agreed that the most fitting theme for their beer would be the names of women who had influenced their lives.

This is how their Belgian Blonde, Isabell, and Porter Rye, Elaine, came to be. Both Isabell and Elaine, along with other beers, made appearances at local homebrew competitions where they earned the couple several awards. It was clear the couple had a gift worth sharing with others.

Entering competitions made it necessary to give the brew its own name—the Red Crow was officially christened in 2011. The craftsmanship of the homemade brews were so impressive that Mistie’s parents, Joe and Lorretta Fisher, volunteered to help make the brewery an official small business. It would be another four years before the Red Crow Brewing Company opened the doors of its first location in Springhill, KS.

From its inception there was a strong focus on the quality and flavor of the small batch brews. A large grassroots following soon gave rise to the need for a larger location. The brewery’s newest location on west Santa Fe in Olathe opened its doors for business in March 2019.

“This location is a lot closer to home for us,” Mistie says. “But that isn’t the only benefit to being located here. This side [of town] has been needing something like this, and we are so glad we get to be a part of this ‘push’ that is happening now.”

While one could track the Red Crow to a tap at a local Olathe-area bar, the space of the brewery itself offers an augmented experience. Industrial garage doors open the space up in milder weather. The seating varies among sturdy pine park benches, upholstered, vintage high-back chairs and minimalist aluminum frame chairs. The brewery also offers local wine and cider options for those who prefer to drink from a wine glass. The regulars of the brewery further demonstrate the variety to be found at the microbrewery.

A soft seating area for children reminds us that city-dwelling singles are only a portion of the craft beer aficionado's demographic. Older regulars frequently pop in to try the newest release and pass time chatting with the friendly staff.

A strong demographic Mistie and Chris did not expect to encounter were the empty nesters.

The monthly events may center on beer, such as their homebrewing 101 class which typically sells out shortly after open enrollment. Their beer tasting classes are just as popular.

“We give [customers] notebooks for this class so they can take notes as we go through each beer. We tend to use more ‘extreme’ examples of flavors in our entry-level classes, so it’s easier to identify a flavor when it’s present,” Mistie says.

Even with all these options, the Red Crow staff knows that the interests among their customers don’t stop there. That’s why they also host events such as succulent planting, featuring appearances from Suburban Lawn and Garden experts. Customers even have the option of decorating their succulent tin with provided materials.

“You could say we are very eclectic,” Mistie confesses. “We have such a wide variety of customers and regulars. The people who come here don’t come to (overdrink). It’s a very family-friendly atmosphere.”

Red Crow has partnered with BB’s Grill to ensure customers also have meal options to pair with their beers. Patrons can simply place a food order which Red Crow staff pick up from the restaurant and deliver back to the brewery. Food menus, along with a full calendar of scheduled events can be found on Red Crow Brewing Company’s website. Tickets for events can be purchased on Eventbrite or smartphone app.