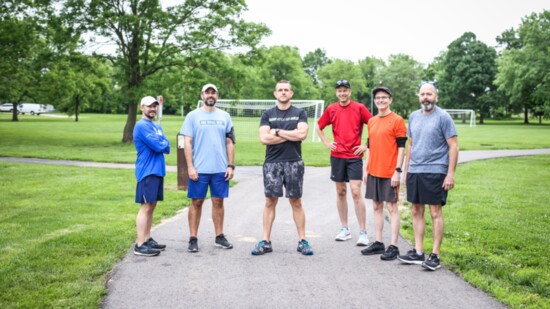 Local runner has stepped up to the challenge of staying fit.

Justin Knapp sees his fitness journey as a way to motivate others while improving himself.

Sometimes a fire can be lit inside us when we least expect it. That is what happened to Justin Knapp. When he ruptured two discs in his lower back in his early twenties, he went to a chiropractor in an attempt to get his back strengthened up.

“I was out of shape and needed motivation,” he says. “Before my 30th birthday, my brother challenged me to a Warrior Dash, which is a 5K obstacle course. I hadn’t run since high school, but I couldn’t let my older brother win! So, we purchased a used treadmill off Craigslist and started to run. At first, I could barely run for a minute, but with the determination to beat my brother, I was able to make it to the 3.1-mile distance. Yes, I did beat him!”

He admits to not always being an active person, but that race sparked a fire in him, so he looked up local running clubs and found the Olathe Running Club (ORC). There, he met some amazing people who motivated him even more. He signed up for races and eventually ran a marathon. Desiring more from running, he met a gentleman named Gary Scott, who is a local legend for Streak Running, which means you run at least one mile every day for as long as you can.

“I started my own Running Streak December 26, 2014. Since then, I have run at least one mile every single day. My average daily mileage over the length of my streak is 3.9 miles per day,” he says.

Now at almost 40 years old, he is married to his middle school sweetheart, Randi, a teacher in Olathe. They have three children, Nevaeh, 15, Hayden, 12 and Ava, 6. All have run with him at different points. His wife is currently on a fitness journey of her own.

“Sometimes, my kids ride their bikes on my runs, and honestly, I would not be able to run as much without my wife and kids supporting me like they do,” he says and smiles.

His goal with his running streak is to go as long as he can. He is getting close to 10,000 miles over the life of his streak.

In May of 2013, he decided to start a running group called Running Arrows Out to help motivate people as he was motivated. It is a faith-based running group where each runner invests in the people they are running with.  “

“We call them Meaningful Miles,” he says. “It’s like therapy while you’re running. We say a prayer before we start every run which helps set the mood of the run. It’s not a big group, but we have all played important parts in each other’s running journeys. We’ve trained for 5K’s, 10K’s and half marathons together.”

Justin has found he enjoys motivating others to achieve their fitness goals. He suggests that anyone who wants to start their fitness journey, simply lace up those shoes and step out the door. Once you’ve done that, your journey has begun.

“Find a local running club near your house or in your city. It can be scary to go to a running club if you don’t see yourself as a runner. But everyone starts somewhere. Most people in running groups were not collegiate athletes. They were people starting off where they were. No matter your age and no matter your health level,” he says.

To connect with Justin, visit: