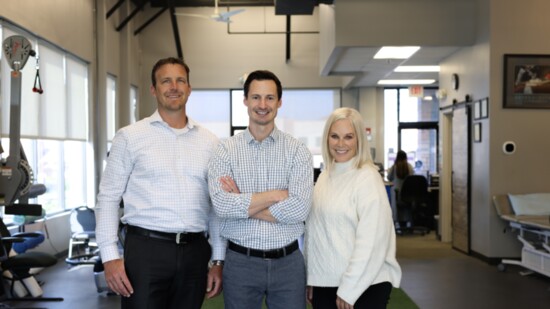 Making you feel better is priority one for these professionals

They say success happens when hard work and opportunity collide. This is the story of Blue Valley Physical Therapy. Ann Cooper opened Blue Valley Physical Therapy in October 1996. The family farm she grew up on in Nebraska taught her the core values she needed to start her own physical therapy clinic, including hard work, a “fix it attitude,” independence, freedom and risk-taking.

After graduating from the University of Kansas in Physical Therapy and working for others for eight years, Cooper felt it was time to put her core values to work and open her own clinic.

“My vision was to create a clinic that not only gave exceptional customer service but was grounded in principles of histology, traumatology and neurophysiology,” she says. “These principals provide a scientific rationale behind every evaluation and treatment they provide. This was a unique view of treating patients at the time.”

With this vision, Cooper opened her clinic in October 1996 at the corner of 151st and Metcalf and practiced solo for five years. Gradually the clinic's volume started to pick up pace and in 2001, as luck would have it, Ryan Klusman came on board.

“He had just graduated from Rockhurst University with his physical therapy degree and was looking for a job. I hired him!” she says. “Ryan provided another level of expertise, energy and professionalism, so in 2001, he became a partner and has contributed greatly to the growth of the overall clinic.”

Over the last 25 years, Blue Valley Physical Therapy has continued to grow and today has 27 therapists offering both physical and occupational therapy. They have opened three additional clinics in Johnson County. Originally focused on manual therapy, today they have expanded their specialties to include vestibular therapy, concussion therapy, women’s health, aquatics, dry needling, women’s health, sports medicine and many other services.

Blue Valley Physical Therapy specializes in the diagnosing of musculoskeletal injury, relating it to your specific biomechanics, and then providing you the pathway for the most optimal healing in the shortest amount of time possible. They believe that treatment is not just getting rid of the pain but providing you with the strength and proper biomechanics to prevent the injury from ever coming back again.