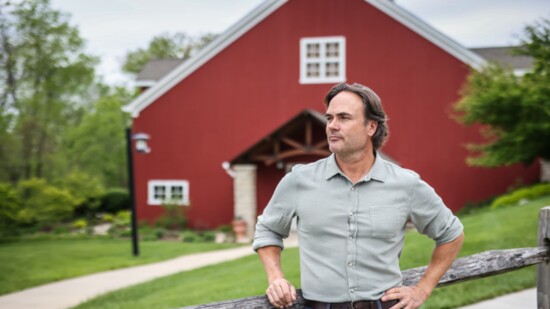 After a successful real estate and contracting business in Orange County, California and more than 550 episodes of do-it-yourself television under his belt, Matt Blashaw has just opened a new chapter of his life by moving his family to Leawood.

Blashaw, a licensed contractor and realtor, is a recognizable face from HGTV and DIY Network shows such as Yard Crashers, Vacation House for Free, Deconstruction, Project Xtreme, and Money Hunters.

From the time he was a child, Blashaw says he has felt the need to be doing things with his hands, and he has always loved to make things materialize. He learned from working in his dad’s lumberyard and from simply making mistakes. He says there should be no fear around making mistakes, and he believes mistakes are an important part of learning and moving forward.

He became a licensed contractor at the age of 23 and started with some light remodeling. Before long, he was building homes from the ground up and obtained his real estate license. He found great success in these endeavors, and simultaneously the entertainment industry also interested him. As such, he decided to enter some competitions to become a home improvement show host, which opened the doors to his time in television.

After all his established endeavors in California, his reason for coming to the Midwest came into his life as a guest on an episode of Yard Crashers.

The episode was filmed in Kansas City and featured Blashaw building a plant wall. They hired a local gardening expert, Lindsay, to plant the pots on the wall he built. Matt was immediately smitten with Lindsay and sought out her number. After marrying and living for a few years together in California, the Blashaws gave thought to where they would like to raise their young son. As a result, they bought a home in Leawood and moved in May.

“We always figured we would come back,” Blashaw says. “I fell in love with Kansas City and the people. I thought the architecture around here is some of the most beautiful around the country.”

“It’s beautiful to see how Kansas City embraces its past,” Blashaw says. “That is what makes us such a diamond of a city. It is good family values. It is good neighborhoods. The people here will do just about anything for you.”

Using his years of experience as a contractor and realtor, Blashaw is getting to work here in Kansas City with his company, Blashaw Residential, and will offer clients the ability to buy, sell and build with him. He says hiring contractors and realtors are often two separate steps, but he plans to offer design and staging consultation before he lists a home for sale as well as remodeling services after the purchase of the next home.

“It’s a new concept I believe will make the transition from one home to another a less stressful event,” Blashaw says.

He will also be offering landscaping design and consultation services.

As far as television is concerned, Blashaw says he is considering a few projects, but right now his goal is getting his company established locally and will see what might come. Overall, he emphasizes he is always gaining new experience and sees everything as an opportunity to learn.

“It’s been an incredible journey I have had in my life,” Blashaw says. “I am thankful for every triumph and every failure.”