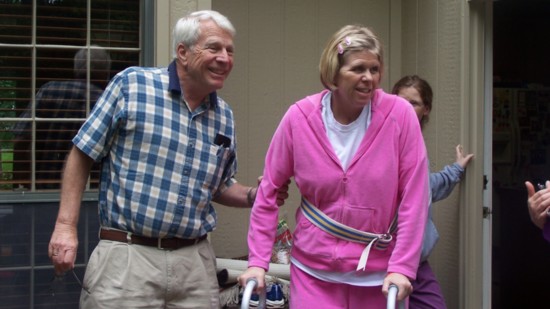 How One Woman Managed Physical + Emotional Struggles, Which Inspired Her to Write a Book

“You cannot always physically see that someone has disabilities. You may not know what is going on with someone in front of you in the grocery line struggling to put their change away. You do not know if they have experienced a brain injury. Extend grace.”

Talking with Terri Kern is like having a conversation with a close childhood friend. Her words are comforting like a well-loved blanket, her eyes engaging as the colors of autumn, and her kindness the strength of a thousand hugs. But it is hearing her story, a story of beating unimaginable odds, that transforms what is known about hardship into something reminiscent of a miracle.

Kern’s life prior to the morning of April 28, 2008 was one she described as busy. A loving wife to Mike and a mother of five beautiful children, she spent her days making sure schedules were adhered to, school obligations were honored, and their fast-paced lives were matched with harmony. Add to this her extensive involvement with volunteer organizations, and Christianity could have easily taken a backseat. But as evidenced by a worn wooden cabinet, discolored from her back resting against it every morning in prayer, Kern steadfastly kept her faith central. And this faith would be rocked to its core.

There is never a way to truly prepare for an accident as they generally come unannounced and during a time that is not ideal. But Kern believed that the trials her family had previously endured was God’s way of preparing them for the events that would soon follow. Her husband had recently battled diverticulitis and chronic back pain that left him debilitated for months, and her daughter also suffered a broken shoulder. These incidents are stressful enough on their own to weaken even the strongest of bonds, but they would instead persevere.

“It taught all of us humility and to lean on others and accept help,” Kern explains. “Also, to give people a gift by letting them do that. It is just as important to receive the help as it is to give it.”

It is within this humility and spiritual solace that they would be primed for what was to come. The magnitude of that day, April 28, 2008, would forever alter the family and become a defining moment. While on a routine morning jog, Kern was struck by a car that caused her to go airborne 35 feet. She was immediately rushed to the hospital where she was alert enough to talk with her husband. However, it quickly became apparent that her injuries were much more extensive, and her internal trauma would set in motion a series of surgeries and appointments that would force her to attack life through a completely different lens.

In suffering a traumatic brain injury coupled with several strokes she realized she would never be the same. Her reliance on her family as well as her amazing medical support team were pivotal as she endured OT/PT schedules, speech therapies, and relearning everyday tasks such as driving, walking, and feeding herself. This road was riddled with setbacks and uncertainty that affected each person in her family differently. But it is a journey that she has not taken for granted and believes it to be part of God’s plan in teaching her to slow down, trust the process, appreciate the small things, and focus on relationships.

Terri Kern is thankful that her life was spared. She is thankful that she is now able to share her story to help others. She also realized that it was not just her story to share and determined that writing a book would be therapeutic for the entire family. The book, Moving Mountains-Discovering Joy Through Suffering, tells of their journey in navigating the struggles that follow brain injury and extend awareness. It focuses on the emotions, the doubts, and also the triumph that comes with any life-changing experience and does so through the perspective of those closest to her. It illustrates miracles through pain.

“Why did I write this? It is simple. Many times, we go through things in our lives that shape who we are. Many times, we forget the details and forget to give God the glory. We tend to get back into the normal routine of things. I do not ever want to forget this period in my life. Throughout this struggle, we saw and experienced such joy, hope and love.” —Terri Kern, excerpt from Moving Mountains