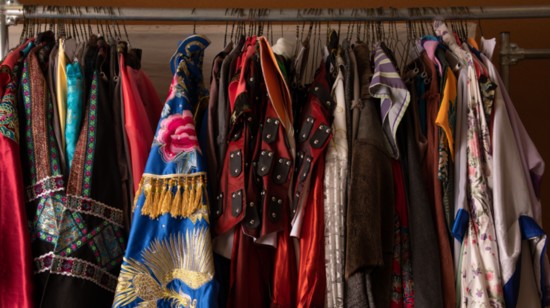 Lyric Opera of Kansas City has been creating transformational opera experiences for more than 60 years. Lyric Opera currently performs in the heart of the city at the Kauffman Center for the Performing Arts with Tracy Davis-Singh as the director of production.

“I coordinate all members of the production team, from costumes and scenery to lighting and makeup,” says Davis-Singh. “I create all schedules while working with our unions IATSE (International Alliance of Theatrical Stage Employees) and AGMA (American Guild of Musical Artists) while coordinating all production budgets, scenery and costume rentals that travel throughout the United States.”

In 1957, a young conductor named Russell Patterson set out to bring the European opera-theatre to America. That next year, they presented their first performance.

Davis-Singh says that the Lyric Opera began in 1958 by presenting La bohème at the Rockhill Theatre, a former movie theatre, where the company performed for 10 years until a fire destroyed it. After a few seasons at the Uptown Theatre, the Lyric Opera moved into the Capri Theatre.

“Eventually, we purchased this space and named it the Lyric Theatre, where we performed until 2011,” she says. “When the Kauffman Center for the Performing Arts opened, we moved our performances there. During this time, we also opened our own facility, the Richard J. Stern Center, which houses our administrative offices, rehearsal space, scene shop and costume shop.”

Davis-Singh turns the artistic vision of CEO and General Director Deborah Sandler into reality by bringing each artistic piece together.

“It’s an extraordinary puzzle to put together when you are producing opera, and one that can easily take up to two years from conception to opening. There are multiple steps in the design process before a single piece of scenery or a costume gets built, starting with preliminary designs in black and white images and eventually in color. After that, overall color palette and textures are determined, and the costumes and scenery are built by specialized artisans. Then, everything is put together when rehearsals begin at our production center. Many of our principal singers come from outside Kansas City, but our chorus is cast with local singers. We rehearse for two to three weeks, move onstage to rehearse with the scenery and costumes, and add the Kansas City Symphony as our orchestra.”

The audience doesn’t see what’s hiding behind the curtain—the production team needed to bring a performance to life.

“Beyond the director, conductor, singers, and orchestra, there is an entire village backstage making it all happen. During the build phase, the carpenters and scenic artists work on the scenery while the cutters, drapers and stitchers work on the costumes. The prop master hunts props and furniture as directed by the scenic designer while the assistant lighting designer rents light fixtures. The technical director works with the set and lighting designers to make sure everything fits and works in the space. All of this planning takes place before moving to the Kauffman stage because time is limited there. Once onstage, there can easily be 20 stage crew moving the sets and lights around, 15 wardrobe crew helping the artists with their costumes, props crew, painters for final touch-ups and a team of stage managers to dot the i’s and cross the t’s.”

Davis-Singh says that the Lyric Opera is fortunate to have so many talented artists in Kansas City: “One of the benefits of building scenery and costumes is that these get rented to other companies and becomes a source of income for the Lyric. I also find it exciting that our work is traveling all over the United States representing Kansas City in such spectacular fashion.”

It takes several people to research and create each and every costume.

“Creating costumes is definitely a team effort with the costume designer taking charge. There may be historical research to be done, but if the historical period predates photographs, we study the art of the period. Costume designs may be determined by the subject matter of the opera, or the director may come up with a specific concept. Once a style and direction is chosen, the designer will go through the process of sketches, researching fabrics and reviewing budgets. As part of choosing fabrics, many times a costume designer will consult with a lighting designer to avoid costumes turning an unanticipated shade of the intended color once the stage lights are turned on. The costume designer will work with cutters and drapers in a costume shop to develop the patterns. Once the costume is created, there’s a fitting with the performer, and final touches will take place during dress rehearsals onstage.”
Upcoming productions include Mozart’s Così fan tutte, Bizet’s The Pearl Fishers and the Exploration Series production of Penelope by Sarah Kirkland Snider.

“While most operas are in a foreign language, all of our performances have subtitles so you can understand the story. Since we tend to plan our productions one to two years in advance, we are always looking to the future. Our 2019 and 2020 season will be a great mix of traditional operas that will capture hearts and minds. There will be something for everyone!”