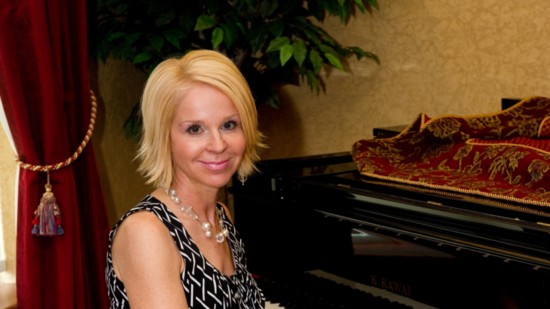 Providing jazz all around town

Kansas City is known for its jazz music, and if you have enjoyed listening to live music at a hotel, club or restaurant around town, there is a good chance you heard Candace Evans. Having performed at many of Kansas City’s iconic locations, Evans has been a fixture in the local music scene for more than two decades.

“I love to perform because it inspires me to see how a lyric or a melody can touch people,” Evans says. “The power of music is an amazing thing, and the therapeutic aspect is undeniable.”

Evans grew up in the Kansas City area listening to the songs of Nat “King” Cole, Frank Sinatra, Billie Holiday and Barbra Streisand. She studied classical piano and voice from the age of 8 all the way through college, and in college she also studied at the Backstage Workshop with Lilian Armijo.

While her background was in classical music, she expanded her range into jazz music as she looked to pursue professional opportunities. As such, she studied with Carol Comer, a respected local jazz musician and educator, for further training.

Evans loves the idea of being able to improvise with jazz and put her own stamp and personality on a piece of music. The give and take that occurs with the band members is also something she enjoys.

“To be able to express a song in a unique way each time I play it breathes life into the performance,” Evans says. “It keeps me on my toes, especially when I’m working with other musicians and we’re playing off of each other. There are some incredible musicians in Kansas City, and I’m in awe of their ability to accompany me.”

She frequently performs at the InterContinental Hotel and Ophelia’s in Independence and has performed at the Ritz-Carlton Hotel, the Raphael Hotel, Union Station and more. She’s also played at various outdoor music series around town, including the ones in Overland Park and the Plaza.

Additionally, she has experience playing at other venues throughout the Midwest, including spending several years at the Lodge of Four Seasons at the Lake of the Ozarks.

It’s been a few years since she recorded her albums, Interpretations and So Nice, but she plans to return to the studio again soon to record another project. Her last album included trio, quartet and quintet arrangements, but this time she would like to concentrate on more solo and duo work. She’s also considering a solo piano album.

One musician that continues to inspire Evans today is jazz pianist and vocalists Diana Krall. She says the way she weaves her piano with her vocals is truly special.

As for advice Evans gives to aspiring musicians, she says perseverance is essential.

“The competition—especially in a city like this with so much talent—is unbelievable,” Evans says. “My biggest piece of advice is to persevere and not give up. In this business you are going to have highs and lows.”

Whether she’s performing at a restaurant, outdoor concert or retirement community, Evans says she enjoys seeing people of all ages enjoying music and having a good time. More intimate settings such as clubs and small restaurants are especially fun for her as she can communicate personally with her audience.