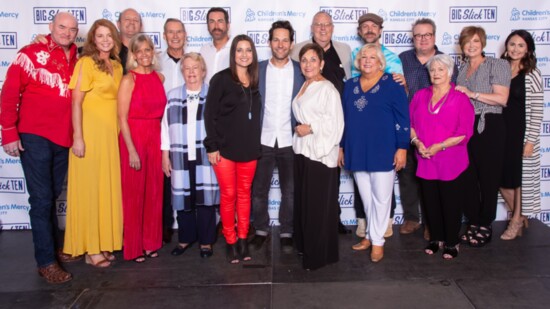 “I’ve never undertaken anything where I didn’t think I would succeed,” Gloria Rudd tells me, her charming British accent as strong as ever.

A middle child growing up in the London suburbs of Chiswick and Surbiton, young Gloria likely couldn’t find Kansas on a map. That she would make this her home for over four decades would have seemed more fantastical than any tale Roald Dahl could conjure. Life is nothing if not surprising. “Fate loves the fearless,” as poet James Russell Lowell once claimed.

After a tour in the U.S. Navy, Gloria’s late husband Michael began a long, prosperous run in the travel industry, where a promotion with TWA eventually brought the family to Kansas City. It was here that Mrs. Rudd built an impressive career in ad sales, eventually launching her own agency (Gloria Rudd Advertising). Kansas is also where the Rudd children spent their formative years, leading to successful careers in their own right: daughter Mandi is CEO of Brain Energy Marketing and son Paul is a bona fide Hollywood movie star. But more impressive than these achievements are how affable and humble both remain—character traits that were no doubt imparted by their parents and reinforced by their surroundings.

“There is such a feeling of love in this city. It’s such a warm and welcoming place,” Gloria notes.

This sense of community may be why Rudd finds such fulfillment through giving back. During her time in KC, she’s been aligned with numerous charitable organizations, including holding the executive director role of Will Shield’s “Will to Succeed” Foundation. Her most well-known cause, however, is that of Big Slick, a wildly popular fundraiser now gearing up for its 12th year.

The annual event, which benefits Children’s Mercy Hospital oncology programs, was born in 2010, when actor Rob Riggle, having just witnessed surgery on a newborn, was so impressed with the care given that he created a fundraiser for the hospital in the form of a celebrity poker tournament. From there, he brought in Paul Rudd, who in turn brought in Jason Sudeikis. All three have deep KC roots. These three were the founding members of the charity (locals Eric Stonestreet and David Koechner have since joined), eager to give back to a community they still think of as home. Running things on the back end falls to family and friends. Paul’s sister Mandi is involved. So too are the sisters of Eric Stonestreet and David Koechner (Mauria and Joan). Rob Riggle’s brother in-law, Mark and sister Julie as well as Jason Sudeikis’ mother, Kathy, have been involved since the early days. Even Paul and Rob’s fraternity brothers are in on the action.

This army of volunteers allows the charity to provide as much as possible to Children’s Mercy, a fact Gloria Rudd trumpets: “We don’t have one paid employee. We have zero budget and zero salaries.”

In year one, they hoped to raise a modest $50,000. The thought expressed to Rudd was “you’ve got to walk before you run.”

“And if we all thought like that, we’d still be living in caves,” Rudd shot back, not in the business of half-measures. They more than doubled their expectation, raising over $120,000.

In subsequent years, the poker tournament evolved to a softball game at Kauffman Stadium. The Saturday night auction generated such demand it eventually moved to T-Mobile Center. All along the way, the number of participating celebrities ballooned. Word, it seemed, had gotten around Hollywood circles about this magical event in the heart of America. The reason was simple: Children’s Mercy Hospital. The beloved not-for-profit is world-renowned for pediatric care, oncology and research. While celebrities participate in many charitable events, Big Slick holds one key difference, according to Rudd: “Those involved put it to me this way: this is the only event where we actually get to see the impact of our charitable giving first-hand. We get to see the faces and places that it’s all for.”

Though the event went virtual in 2020, they still shattered expectations, generating over $2 million—bringing the total raised for the hospital to over $12 million in the event’s 11-year history.

Despite Big Slick’s fundraising success, Gloria Rudd isn’t yet satisfied. “I just wish that we could do more.” A sentiment that sums up an exceptional life defined by always aiming higher.

Learn all about Big Slick 2021 at www.bigslickkc.org