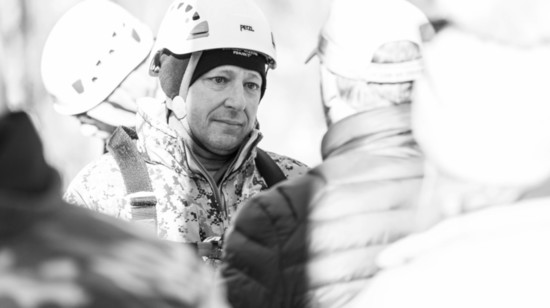 While attending K-State, on the eve of the Iraq War, he enlisted in the U.S. Army. Several factors led to this decision. He explains, “Many of my childhood heroes were family friends who had served, mostly in WWII. I felt I should contribute to my country.”

He was assigned to the 1st Stryker Brigade Combat Team (SBCT) 25th Infantry Division out of Washington State. He trained as an infantryman and served as radio operator for a combat infantry platoon.

While deployed to Iraq in 2004, Hoover was injured during a combat patrol mission. “We were chasing a suspicious vehicle through Mosul when my vehicle was struck by a suicide car bomb,” Hoover recounts. “An artillery shell in the trunk exploded. Shrapnel shredded seven of the eight tires of the vehicle, ripped through the receiver of the machine gun, rendering it useless and injuring my left hand. Thankfully no one else in the vehicle was injured.”

Due to needing to be medically evacuated from the area, his deployment was cut short. He underwent two surgeries in Iraq, before being taken to Germany where a third surgery was performed by a specialist. Justin was awarded a Purple Heart for the injuries he sustained.

Today, Justin is still contributing greatly to his community and country through his work as executive director of operations for The Battle Within, a non-profit organization founded in November 2018 by more than 100 veterans, first responders, community leaders and supporters. They are devoted to helping military personnel and first responders deal with the psychological challenges of their professions.

“Adam Mager is the founder of this movement in Kansas City,” Hoover says. “He was an Army combat medic who returned home and suffered greatly. Unable to find the help he needed, he began looking at ancient warrior cultures to see how they coped with the aftermath of war. From that he developed the curriculum we currently use today.”

The Battle Within offers a five-day program, free of charge for all who attend. “We serve warriors nationwide,” Hoover says. “These are veterans, first responders, dispatchers, federal agents, corrections officers, ER doctors and nurses.”

“It is our belief that every warrior deserves the same opportunity to heal from the traumas they have endured in their service to others,” Hoover says. “We have come together to provide a program built by warriors using holistic techniques steeped in ancient warrior culture and backed by modern evidence-based methods. We are working to make Kansas City the nation’s destination for Warrior Mental Health. Thanks to the support of our city, non-profit partners and donors, we are able to work for our veterans and first responders every day.”

For more information or to apply, visit mybattlewithin.org