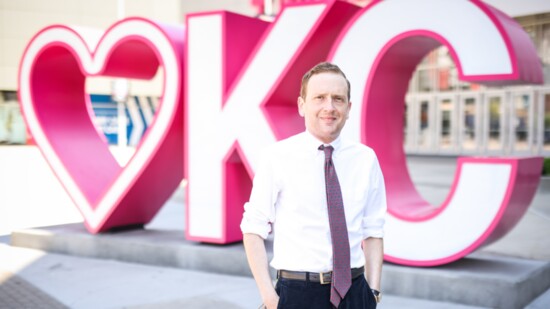 THE HEALING POWER OF LOVE

On February 10, 2020, Mark Passaro checked into the University of Kansas Medical Center. Nearly three years prior, he’d undergone a successful double lung transplant, the last resort for those that live under the shadow of Cystic Fibrosis, a genetic disorder that damages the lungs and digestive system. The reason for his hospitalization (chronic lung rejection) was not an uncommon occurrence for those who have undergone a transplant.

In fact, Mark hoped his stay would be a brief one as just a few days prior, while visiting a friend in Iowa, he had met a nurse anesthesia student. The two exchanged phone numbers and shortly after returning home and being admitted to the hospital, he shot her a text, proposing the two get together when he returned to Iowa in a week or so. Fate had other plans, however. Over the next 50 days and under constant medical care, Mark would face the prospect of death while discovering the healing power of love, all against the backdrop of a global pandemic. It would prove to be the most transformative two months of his life.

Katharine Patterson, the nurse anesthesia student, was cautiously optimistic. She had just begun a two-month clinical rotation in Dubuque, Iowa. While the man she had met had certainly made an impression, she had grown up in the tiny town of White Lake, Michigan and was guarded by nature. Mark had informed her of his hospital stay but noted he’d be out shortly. The pair made plans to reconnect in Iowa, settling on a cozy wine bar they both loved, a proper date. In the meantime, Mark suggested they continue to text until he was released. Katharine agreed. Quickly, the texting turned into a daily FaceTime between the burgeoning couple. What had begun as a mutual interest began to evolve into something more meaningful.

“As time went on, we began to have real and deep conversations,” Katharine recollects. “He had a way of understanding what I was feeling before I could articulate it. I remember thinking that this was a very special person and that I was going to live in the moment no matter what each day presented.”

As the days turned into weeks, Mark’s conditioned worsened. Soon, he was transferred to the ICU and put on oxygen to assist his failing lungs. Around the same time, as hospitalizations exploded, the COVID-19 outbreak was declared a pandemic, adding a new dimension of risk to his recovery.

“It was the sickest I’d ever been,” he recalls. “I definitely considered the possibility that I was never going to make it out of this.” Eventually, his doctors turned to plasmapheresis treatments, a process where existing blood plasma is removed and exchanged with new, healthy plasma. The procedure finally turned the tide for him, and he was released from the hospital in late March of 2020.

After quarantining for two weeks in Iowa, Katharine made the trip to Mark’s home in Shawnee, Ks. The two were unsure if their connection would remain strong outside the emotional weight of Mark’s health crisis. What was planned as a sojourn turned into a lengthened, 11-day stay, as admiration quickly solidified into love.

“He was such a smart, introspective man,” Katharine says. “During that initial visit, we went to Loose Park on a beautiful afternoon, laid on a blanket and took a walk around the Nelson (Atkins Museum).  I fell in love with him that day at that park.”

Mark had come to the same conclusion. “When I took Katharine to my parents' house, I noticed how caring she was with my mom, who had recently suffered a stroke. Being around her calms me.”

In fact, the bond between the couple coalesced so quickly, Katharine has since moved to the Kansas City area.

As for the usual “how did you two meet?” question, the couple knows they have a story that will be hard to top. “It's pretty crazy. It's nuts. We fully acknowledge it,” Mark admits.

Katharine agrees. “Our story is insane. At the time, everything was falling together too easily, but I didn’t care. I would have rather met this man and felt this way for however long it lasted than to have never had this experience at all.”

Beyond the world-class medical care Mark received, he is certain the deep relationship forged with Katharine during those critical days contributed to his recovery. “I don't know how I would've made it out of that dark time without her.”

2020 was a year most of the world would like to wipe from memory. But for Mark and Katharine, it’s a year they never want to forget.