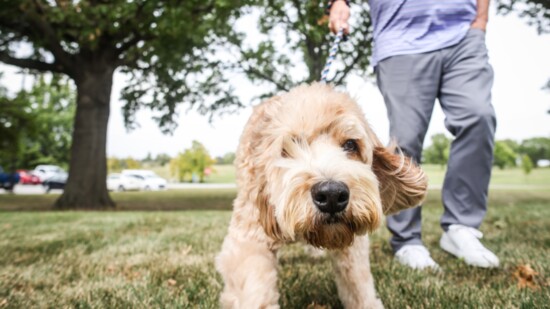 The Light at the End of the Row

Walk into any animal shelter, head to the back, and you’ll find one: the animal that’s been labeled, mistreated, given up on. They’ve been there the longest, denied of the one thing they want most: a loving home. “The dog at the end of the row,” as Scott Poore calls it.

Poore, founder of Mission Driven Goods, dedicates every waking moment of his life to helping these animals. His company, through the sale of pet-themed apparel, helps raise desperately needed funds, while promoting adoption and saving countless dogs in the process.

But it wasn’t always this way. Years ago, as Poore was grabbing at the next rung on the corporate ladder, he realized something was missing. “I was going through a phase in my life where all that mattered was what can I take from the world? How much money can I make? What kind of car am I going to drive? Where's my vacation? And that's not the person I am. There was an emptiness inside of me,” he recalls.

Not long after, Poore quit his job and began to focus on ways he could give back. Over the years, he had done some work with Great Plains SPCA, mostly dog walking.  But he realized he’d never really spent any time inside the shelter itself to see what its true needs may be. And so, he returned with fresh eyes, immediately connecting with one of those dogs at the end of the row. “That moment hit me in the heart,” he notes.  At long last, his true purpose became clear. The next day, he cashed in his 401K, left his old life behind, and began working at the shelter.  For two years, he did the jobs no one else wanted. It was a humbling yet valuable experience that only deepened his desire to help. After passing the necessary courses, Poore began to focus on the animals most in need, from neglect cases, abuse cases, animals seized by police, and those dumped at the shelter.

While Poore finally felt fulfilled, it takes more than passion to pay the bills. With an empty bank account and a full heart, he decided to make one last gesture to Great Plains SPCA before reluctantly returning to corporate life.  He crafted a simple design on a t-shirt, sold as many as he could in a month, and donated the proceeds to the shelter upon his resignation.

But before he could leave, a friend pulled him aside with an idea. Why not leverage the success of that one t-shirt into a full-time apparel company? “You've got a fire in your eyes, man,” the friend pleaded. And from there, Mission Driven Goods was born.  The proceeds allow Poore to travel to shelters across the area, using his large social media presence to shine a light on those animals and facilities that most need help. He’s willing to do whatever it takes to get a dog adopted. He’s traveled long distances.  He’s invited animals into his home. He’s commissioned billboards. And in a move that went viral, he dedicated a week living inside the kennel of Queen, a very special terrier who had spent 400 days inside a shelter, spurring her adoption.

The experience changed him. Many rural shelters, like the one that housed Queen, lack basic heat, air conditioning, and plumbing. Most are on life support. Mission Driven Goods not only helps these small shelters with adoption but also teaches them how to be profitable and sustainable through donation platforms. Poore is also in the process of forming partnerships with HVAC companies to ensure these animals stay cool in the summer and warm in the winter.

“The goal is to make a splash at every organization we touch,” he notes. In fact, Mission Driven Goods is currently in the process of becoming a 501(c)(3) organization, a move that will allow direct donations and greatly expand their reach. “I don't know that there's many people doing what we plan to do. The sky is the limit,” he beams.

Not long ago, Scott Poore felt lost and unfulfilled. Now, after dedicating his life to service, he’s never felt more content. “I’m in love with my career. I’m in love with volunteering,” he says, smiling.

His message is clear: follow your heart. Help others. Be the light at the end of the row.