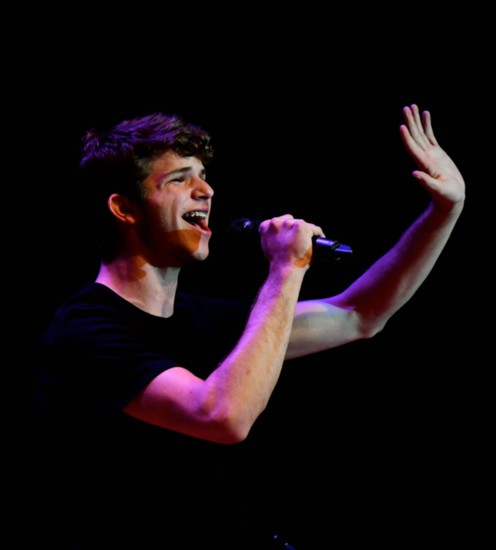 Will Gurley, a Leawood resident and junior at Kansas City Christian School is making a big impact in our community through music. The You Matter Music Festival is the brainchild of Gurley and is helping break the stigma of mental illness by bringing awareness and resources to the area.

Tell us about how you got your start in music.

Musical theatre is a huge part of my life—I participate in both theatre at my school and at the Culture House. I was raised in a music-filled household, with my dad being a guitar player and my siblings and I all taking piano lessons. I started playing bass when I was 8 years old and have been hooked ever since. I have been playing guitar for two years now and drumming for about a year. I started writing music freshman year as an outlet for my emotions and struggles with mental illness.

How would you describe your style and sound?

I like to think of myself as pop-rock. I have heavy ‘70s and ‘80s influences, such as Bon Jovi, Foreigner, and Rush, but also pop elements from groups like Panic! at the Disco, Imagine Dragons, and the Greeting Committee. You can find my music on Spotify, iTunes, Apple Music, and all other streaming platforms by searching 'Will Gurley.’"

What is the "You Matter Music Festival" and how did you come up with the idea to organize it? What inspired you?

The You Matter Festival is a music festival promoting mental health awareness and suicide prevention. I have struggled with depression, anxiety, and suicidal ideation and relied heavily on music in my times of need. When I was struggling, the most important things for me were counseling, my family and friends, and writing music. Logic performed his song "1-800-273-8255" (which is the national suicide prevention hotline phone number) at the 2018 Grammy Awards, and something sparked inside of me. I knew that I had to use music to help spread a message of hope to our suffering community. I think that God gave me the name "You Matter" because honestly, I didn't even think about it—the name just popped into my head that same night.

How can the community get involved in the "You Matter Music Festival?"

The You Matter Festival is not a fundraiser. It is free to the public and open to all ages. Our main goal is to bring as much awareness to this epidemic that we are facing through music, teens sharing their stories, and a mental health fair with many providers and organizations sponsored by the Blue Valley Northwest Mental Health Board. The best way to support is by sharing our posts on social media and telling friends about the event, and, of course, attending the event! You can find us on Instagram and Twitter @youmatterfest and on our Facebook page named "You Matter Festival."

You are making quite an impact on your peers by speaking up about depression and mental health awareness. Have you seen a ripple effect and impact from speaking up? How are others you know getting involved or doing things in their own way?

Not a week goes by that my parents or I don't get a text, message or call from someone they know who has or is struggling. The number of people who have now gained the courage to speak up about what they are struggling with is simply incredible. Many people have contacted us looking for resources and people to get in touch with to help them with their struggles and illnesses. There are tons of organizations in the KC area dedicated to ending the stigma and fighting against suicide, and these groups working together is changing the way that people see mental illness. When someone breaks their arm, they talk about it and people ask them about it. But with a mental illness, many times those struggling won't say a word. We are banding together with our community to end the stigma and break down the taboo nature of discussing mental health issues.

How can the community get involved?

Since we are a non-profit and a completely free event, we rely on corporate sponsorships to fund our event. If your business is interested in sponsoring the You Matter Festival, email youmatterfestival@gmail.com.

The Second Annual You Matter Festival is Saturday, August 10, 2019 from 7 p.m.-10:30 p.m. at the Blue Valley Northwest football stadium, 135th and Switzer. Come out to hear some great local bands and artists, and bring your friends and families to this free event.