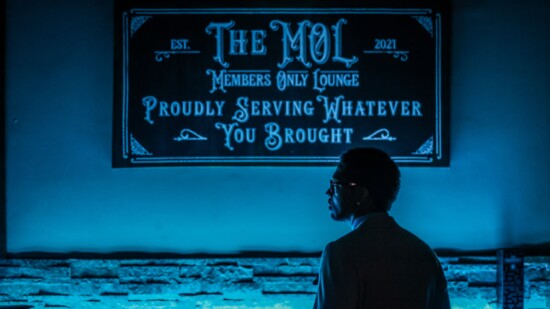 The Man Behind Purple Label

DeJuan Bonds discovered his passion for cutting hair at the young age of 14. The craft, which he’s been doing for 26 years and calls an expression of art, never ceases to bring him daily joy.

“I really like taking the head canvas and trying to give you the look that you desire,” Bonds said.

Bonds is the owner of The Purple Label Barbershop in Olathe. He calls his business an old-school barbershop with a new-school flare. He provides all the old-school services that some barbershops have stopped doing such as hot towel shaves and razor shaves.

Bonds said he works hard to make sure any customer that walks into his business leaves feeling confident and accepted.

“I love the challenge of making sure that I can change and make someone happy with the hair cut or style,” Bonds said.

Growing up in a house with four kids, there wasn’t always money for frequent haircuts, which inspired Bonds to pick up his mom’s clippers and cut his brother’s hair. He admits that the first cut didn’t go very well, but he soon became determined to get better.

“I was like okay I want to try it again, so I just kept playing with it, and thank God for my aunt that had a couple of boys. She didn’t care, she was like just cut their hair so they were my practice heads,” Bonds said.

He became known for his hair cutting skills as he got older and would soon make his dreams of owning a barbershop a reality.

Purple Label is a spin-off of Bonds’ original barbershop opened in 1997 called Napps. It was located on the west side of Olathe, which had many members of the African-American and Hispanic communities. Having a diverse clientele was important to him when he moved to his current location at 11934 West 119th Street and re-named the business Purple Label.

“I wanted to service everyone, it didn’t matter to me because I knew I had the skill set to cut any type of head that came in,” Bonds said.

Bonds has traveled with the team to training camp and other events and even flew out to cut Patrick Mahomes’ hair before his wedding and before Super Bowl 2020.

While being the barber for notable Kansas City Chiefs players is a plus, Bonds said the bread and butter of his business is cutting hair for members of the community from all circles.

“I’m not just the barber to these guys, I’m the barber for everybody,” Bonds said. “I don’t want you to feel like you have to be a certain person or certain type to come to Purple Label.”

Bonds said his clients range in age from one to 100.

He recently opened The MOL, which stands for the Members Only Lounge. The business is a members lounge for Purple Label clientele to socialize and network with other businessmen.

Bonds said the business is a great place for members to get some work done while also having access to private lockers to keep liquor in for happy hour or evening cocktails. The MOL is also available as a small event space.

No matter what business he’s running, Bonds said nothing brings him more joy than being a part of the community and meeting different types of people.