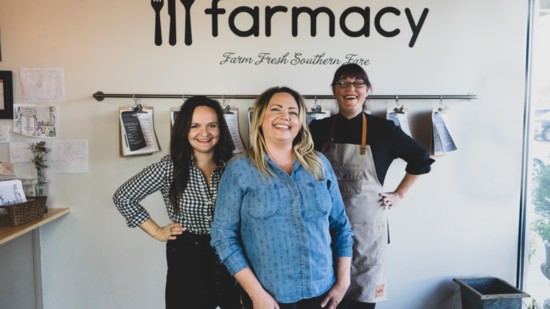 Bettina Hamblin never imagined she would become a restaurant owner, but it was her love for this community and bringing people together that led her to open Farmacy, a fresh take on fast-casual dining in southwest Knoxville. Located at 9430 South Northshore Drive, the storefront location once served as the workspace for Bettina’s previous catering business, Luxe. While she enjoyed the boom of local eateries in the downtown and other parts of Knoxville, the Northshore community where Bettina lives seemed to be missing out on the fun, so she chose to convert her catering kitchen into a comfortable restaurant worth making the drive out west to visit.

Growing up, making dinner was a family affair for Bettina, and she wants that homecooked, made-with-love feeling to translate to all her guests. That’s why she makes sure her entire team at Farmacy loves the food and their jobs.

“I feel like the guest gets to eat all of the joy that we’re experiencing while we’re making the food,” Bettina says. “It’s really important to me that everyone who works here finds joy in those things because it really resonates when you’re eating it.”

Farmacy’s menu features flavors and dishes inspired by Bettina’s childhood homes, from northern Maine to southern Arizona to Nashville. Look for southern foods with a southwestern twist, like tacos with fried chicken, topped with pico de gallo and buttermilk dressing, or the popular grilled Chilean salmon served with a maple-pecan glaze. Weekend brunch features Nashville hot chicken and waffles, a southwestern favorite chicken tinga on a crispy tostada, and a south-of-the-border take on a classic dish with the churro waffles, tossed in cinnamon sugar and served with roasted banana pudding, whipped cream, fresh strawberries, and a salted caramel sauce.

As much as possible, Bettina incorporates fresh, local ingredients from farms right here in Knoxville and the surrounding counties. She makes it a priority to support other female entrepreneurs, farms with purpose, and the community that has given so much to her.

Hamblin moved to Knoxville in 1998 to attend the University of Tennessee, but she expected this to be a short stop on her journey. The fine arts major with emphases in painting and theater had planned to move to Los Angeles or New York City after graduation to work as an artist. However, in her early twenties, she found herself not living her dream but living on the streets and addicted to drugs. She found the strength to get clean and started working in restaurants. It was there she realized her deep love for both food and service. Many of her regular customers were entrepreneurs and businesspeople working in the growing downtown area, and they offered advice, encouragement, and their own dollars to support her when she founded Luxe.

“I was a single mom, but people heard what I was doing and wanted to support that,” she says. “In this community, people just show up for you.”

As a caterer, Bettina witnessed people connecting over food in a way she hadn’t before considered. Whether a wedding, bar mitzvah, retirement party, or any other special occasion, “it’s all your favorite people in the world gathered together,” Hamblin says, and she wanted to create a smaller version of that kinship through a meal. When she came to a crossroads in her business, she knew it was time to make the leap to opening a restaurant.

The name Farmacy is a nod to the “healing feeling” derived from food, and many of the menu items play on that medicinal pun. Guests love the popular Vitality bowl, with a blend of southwestern vegetables, grilled chicken, and a fried egg atop a bed of arugula; the Cure-All grilled salmon sandwich; and the Remedy, which features melted gruyere with caramelized apples and onion on whole grain bread. Bettina hopes the comfort of good food plus the relational connection built through a shared meal will give customers the same healing that her business has provided for her.

“Now as a business owner, I feel an obligation to do more than simply feed people,” Bettina says. She is intentional about investing in female leaders, giving people second chances, and speaking out about the prevalence of alcohol and substance abuse in the restaurant industry. She looks forward to getting to know the people in her town as Farmacy becomes a regular part of their lives.

“I want to give others the opportunities that were given to me,” she says. “The word grateful doesn’t really encompass how I feel about it.”