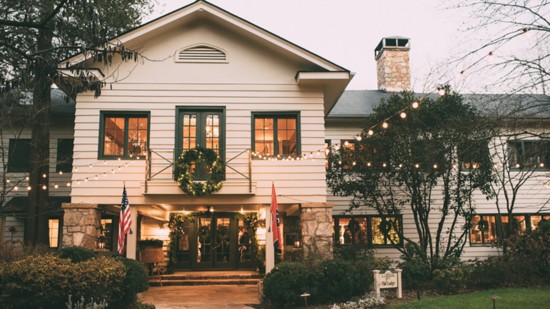 Tucked away in the woods behind Maryville College is a rustic lodge and the kind of restaurant you didn’t know existed. RT Lodge is well-known for its hospitality, particularly when it comes to weddings, parties and other events. In fact, word of mouth works so well for the Lodge that out-of-towners are booking the property for their upcoming weddings and parties site-unseen.

What most don’t know about RT Lodge is that it’s not a private club. It’s not an exclusive event space. It’s not for Ruby Tuesday executives or Maryville College administration. It’s not any one thing, other than a retreat for whatever occasion you want to celebrate.

This winter, spend a cozy night in at the Lodge.

In 1932, Susan Wiley Cooper was recently widowed and moved from Pennsylvania to Maryville to be closer to her sister who was married to the Maryville College chaplain. She fell in love with the wooded grounds and was granted permission from the college to build a home there with the understanding that, after she passed, the property would be gifted to the school. Susan agreed and went on to build Morningside, a 26-room residence with an adjacent carriage house. After her death in 1951, the property served as the president’s residence for a time and was eventually turned into a restaurant and event facility called Morningside Inn.

In 1997, Ruby Tuesday entered a lease agreement with Maryville College to turn the property into a retreat and training space for its company. As the years went on, the Lodge has expanded to what it is today: a 57-room public hotel, restaurant and event center.

Executive Chef Trevor Stockton wasted no time setting up a new life in East Tennessee. When he moved from Detroit to his father’s home state nine years ago, there were plenty of familiarities. He’d grown up coming down to Tennessee for spring and summer breaks, but he wasn’t sure if he would make the state his permanent home.

That is, until he started working at RT Lodge. Trevor followed his brother to the Lodge and worked as a prep cook and eventually the sous chef under Executive Chef Rick Mace. Trevor’s brother went onto other endeavors, but Trevor stayed.

“I don’t know if I’d feel the same if I hadn’t come [to RT Lodge] first,” he says. “A lot of kitchens have turnover, but that’s not the case here. People come and stay. I’ve never had a cook leave here to be a cook somewhere else. They leave when there’s a higher job that I couldn’t offer them, and I’m happy for them. Go and be better, but people don’t leave for the same job somewhere else.”

Every dish starts with a local product, with what Trevor refers to as “the backbone of our food.” Whatever is in season, whatever is available, whatever Dwayne Smith at Horn of Plenty has in from local farms that week. It’s the seasonal produce that dictates the menu.

“Some things are on the menu all the time, like the Lodge Cheeseburger and the Buttermilk Fried Chicken, but even the things that come on the charcuterie board can change,” Trevor says. “There are different meats and pickles we make in-house, so it’s whatever I feel like making.”

In fact, Trevor planted a large garden on his own property so the kitchen staff could be a part of growing, tending and picking the food that eventually makes it to the dinner guests’ plates. He gets whole pigs from his parents’ farm and cures and processes every bit for use in the restaurant. Whether buying local or growing it themselves, Trevor and his team are connected to every ingredient.

“If you’ve tilled the land and pulled the weeds before you’ve seen a single tomato, you’re going to respect it,” he says.

The restaurant at RT Lodge officially opened to the public three years ago, and its days and times are always subject to previously scheduled and reserved events. However, Katie Stinnett, sales and marketing manager, says Open Table is “very accurate.” Reservations are suggested but not required. The busy seasons run from early April to late June and again from September to New Year’s Eve, which means the weekends are iffy depending on whether or not an event is scheduled. Barring no scheduling conflicts, the restaurant is open Monday through Saturday from 5:30 to 9 p.m., but the lounge opens at 5 p.m. for those who want to enjoy a pre-dinner drink and sit-down.

“We have what other places don’t,” Katie says. “We have the ambiance. It’s cozy here. We want people to sit and stay awhile.”

That part is key: the ambiance, the slower-paced evening. You can pop in for dinner and head on your way if need be, but that's not the point. Come in. Have a drink. Stay awhile. The fire is just getting started. Don't you want some s'mores?

Reservations are open for New Year’s Eve for a five-course dinner. Stay overnight in the Lodge or just come in for dinner and the countdown to 2020.