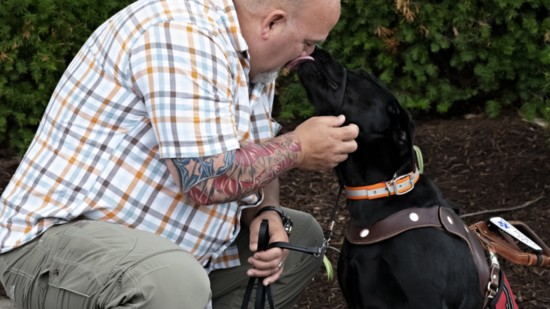 When Master Sgt. Chuck Stewart retired from his 26-year career in the Army, a flood of memories washed over him. The Blount County resident had a lot of time on his hands and an increasingly uncomfortable back. His mobility weakened, his sleep disrupted, and a mess of traumatic brain injuries from seven tours in Iraq and Afghanistan had started to take their toll. He knew he was in bad shape, but Chuck was at a loss of what to do about it.

“My wife saw an ad at a Weigel's that she’d only been to one time. She came home and said, ‘You have to look these people up,’” he says. “I pulled them up, and less than 24 hours later, I called them and started the process. Sadie isn’t a PTSD dog, but what she does to help me is unbelievable.”

Military careers were commonplace in Chuck’s family. His grandfather served in WWII, his grandmother drove tanks, and his other grandmother worked in military intelligence. He had a great-uncle who was a sniper. When Chuck enlisted, he decided to face his fears directly by going to jump school and went on to make 34 jumps over his career. However, one last jump went awry. He caught a wind drift, landing abruptly in the Black Forest and breaking his back. Unfortunately, a misdiagnosis would come back to haunt him later.

“I had compound fractures, but they just thought I had bumps and bruises. I had a traumatic brain injury and was knocked unconscious. I was on light duty for a month, and they kept sending me to doctors cause I’m telling them my back is killing me, but they’d just work me out,” he says. “All the symptoms were there, but they didn’t diagnose them. Then, the way I healed, my whole back was misaligned.”

The proverbial nail in the coffin on Chuck's career happened when two subsequent IED explosions left him with two more concussions and a banged-up body. He retired from the Army in 2014 and contracting in 2015. Then, all of a sudden, Chuck was home wondering what he was supposed to do next.

“My wife knew I needed help. I had no more responsibility except to her and me. You question your self-worth. My sniper partner killed himself. I’ve had guys die because they’re trying to get that something that makes them feel excited,” says Chuck, with Sadie at his side. “I know guys who are 90 years old with WWII stories, and I don’t even compare to that. But I also learned that when you slow down, you have too much time to think.”

As Chuck remembers his tours and the soldiers who’ve been lost, Sadie lays her head in his lap. She senses the shift in Chuck's mood and responds accordingly. Heather Wilkerson, SMSD, canine program manager and career dog trainer, says the dogs dial into facial expressions in addition to sensing chemical changes in a human’s body, which is no different than when medical alert dogs respond to epileptic seizures.

“Whether it’s physical cues or chemical, or a combination of both, we don’t know. We don’t train dogs to detect it. That’s natural,” she says. “We train the dogs to respond to it.”

The response is typically a touch command. The dog may lay his or her head in the veteran’s lap or gently nudge the veteran’s hand to cause distraction. For Daniel Belcher, retired US Air Force/Special Forces ParaRescue veteran, Stryker’s ability to sense his anxiety has been invaluable.

“If I’m in a crowded room, and he senses me feeling it, he’ll pull me outside,” Daniel says. “Or he’ll come up and put his head in my lap.”

Like Chuck, it was Daniel’s wife, Michelle, who decided Smoky Mountain Service Dogs was exactly what her husband needed.

“I’d researched PTSD and the episodes he was having,” she says. “There were days of nonfunctioning, and I was hoping that a dog could help him.”

Daniel enlisted just as Desert Storm got underway in 1990. He was shot in the shoulder in Kuwait, but since the injury wasn’t life-threatening, he went back to work and was shipped out again. A few tours later, Daniel was involved in an explosion that left him in a coma for 32 days.

“I have memories of running along and then waking up in Germany,” he says. “It took a year and a half before I could walk again. I had to learn how to tie my shoes again, how to use a fork. I was honorably discharged and retired with a traumatic brain injury.”

Over time, keeping a job proved more difficult. He struggled with memory, concentration and mobility. Sleep was a near impossibility. After submitting an application to SMSD, Daniel held his breath and waited. Then, in the middle of the night, he checked his email and saw a photo of Stryker.

Smoky Mountain Service Dogs started in 2010 with an idea to provide service dogs to veterans. The “Founding Friends”—Heather and Darryl Wilkerson, Suzy and Mike Kitchens, Elaine Lintner, Rhoni Standefer and Gail Alexander—began by defining what needed to be done and discerning how to accomplish them.

“My wife was on the board of directors of another organization and decided with others that they wanted to put together a first-class organization for veterans. I was retired and playing golf, but I decided to help with the business planning, which was the skill set I had,” says Mike Kitchens, SMSD chairman and spokesman. “We had the first meeting in our living room. We had no dogs, but we knew what we wanted to do. A UT Business MBA class adopted Smoky Mountain Service Dogs as their class project, led by an Army Major, and out of that came our preliminary road map.”

In 2015, the organization purchased 10 acres in Lenoir City with a plan to build a training center. In 2017, the Chris Kyle Memorial Benefit designated SMSD as its Charity of Choice and awarded the organization $225,000.

Construction is well underway and is expected to be open by the end of the year, but until the facility is completed, SMSD will continue training dogs and matching them with veterans out of their rental space in Foothill's Mall in Maryville. The Wilkersons live on the Lenoir City property so Heather can manage the care and training of the dogs, and her husband, Darryl, can manage the grounds. Currently, SMSD has more than 150 volunteers and a working board of directors that keep the organization running, which ensures that for every dollar donated, approximately 95 cents is used to train dogs and take care of veterans.

Veterans who qualify (those with a service-connected physical disability) receive a service dog at no cost to them. Because Smoky Mountain Service Dogs is accredited by Assistance Dogs International, the VA takes care of supplemental costs, such as emergency vet care and annual wellness checks. Additionally, two local programs affiliated with SMSD—PawTree and Natural Pet Supply—provide dog food for the life of the animal.

The training process is lengthy, but that’s a necessity to make sure the veteran and dog are a solid match.

“We supply follow-up support and require that veteran teams come in and get recertified one year after graduation and every two years after,” Heather says. “When they first get the dog, we do monthly contact. We have a templated report—eating and secretion reports, going out and how did it go. These guys are part of our family. We’re a small organization. We don’t produce 300 dogs a year. We want to do 10 to 12 dogs a year and do it really well.”