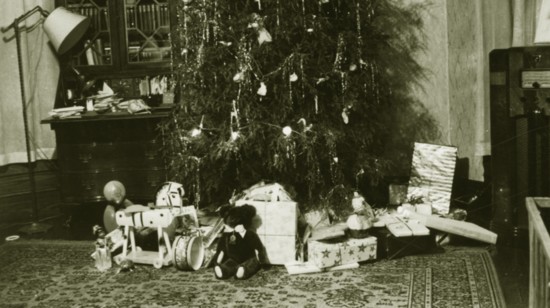 Christmas may seem like it has always been with us, but in Knoxville’s early years, there is little evidence that Christmas was celebrated at all. Considered by many to be an Old World Catholic tradition, it wasn’t celebrated widely across the United States until much later.

Washington Irving, one of a few American writers who wrote about Christmas in the early 1800s, published several firsthand accounts of English Christmases in 1819. But Charles Dickens’ 1843 novel, A Christmas Carol, appears to have been the most influential. The greeting “Merry Christmas” first appeared in Knoxville’s newspapers the following year.

Although Dickens toured the U.S., he never made it to Tennessee. His eldest son, Charles Dickens Jr., however, did come to Knoxville in 1888 and spoke at the Library Hall on Gay Street. It’s unknown if he told the tale of Ebenezer Scrooge.

Curiously, Ebenezer Road in West Knoxville isn’t named after Scrooge at all, but for a family that lived there in the 1790s before Dickens was born. Dickens' influence did extend locally to a prominent house on Kingston Pike, built by Robert H. Armstrong. who named it “Bleak House” after Dickens' novel of the same name.

By the early 1900s, Christmas was already becoming a retail affair. Parents looking for children’s gifts might have shopped at Newcomer’s Department’s Store (where Mast General Store is today on Gay Street), known for its “Wonderful Toyland” filled with building blocks, teddy bears and in 1915 a “mechanical creeping baby.” Fine imported goods could be found at Arnstein’s on Market Street, while across the street Kern’s Bakery provided endless choices for those seeking festive baked goods and confectioneries. Just a few yards away, butchers and greengrocers in the Market House on Market Square could provide you with an entire Christmas dinner menu, which 100 years ago was not too different from today except roasted goose was more common than turkey.

Folks often waited until Christmas Eve to buy presents and bring a tree inside to decorate it. But it wasn’t until 1914 that Knoxville welcomed its first municipal Christmas tree complete with “1,300 electric glimmering lights.”

The late 1920s ushered in the first “Santa Claus Parade” with the man himself greeting crowds in a reindeer-drawn sleigh. Thousands of colorfully lit trees and yards of festive bunting decorated the parade route along Gay Street. Through the decades, the parade has witnessed many changes. Santa rolled along in a red and green airplane one year, while later helium-filled balloons were fan favorites. In 1949, an 80-foot-long dragon appeared followed by Boy Scouts towing nine balloons spelling out a festive “M E R R Y  X M A S.”

In the late 1960s, city officials swapped the annual parade for a Christmas pageant at the Civic Coliseum starring Mary Costa, the Knoxville-born, Metropolitan Opera star, who sang traditional carols. But the parade soon returned and has since been a perennial crowd-pleaser.

These days, other traditions have taken hold, whether it's ice skating on Market Square or even Tour de Lights, a downtown bicycle ride where participants decorate their bikes and some riders even adorn themselves with lights. Across town, Dickens’ A Christmas Carol continues to play to packed houses at the Clarence Brown Theatre, much like it has since 1979.

You can read more about the city’s festive history in A Knoxville Christmas, or for an in-depth tour of the city, try Historic Knoxville: The Curious Visitors Guide to its Stories and Places. Both titles, written by historian Jack Neely for the nonprofit Knoxville History Project, make ideal gifts and available at Union Ave. Books, other local gift stores and at KnoxvilleHistoryProject.org.