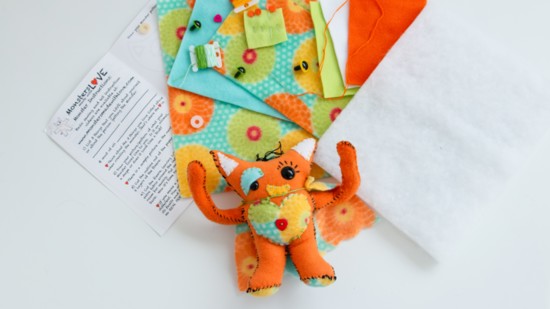 Monsters Made With Love

Art Therapy for Every Age and Stage

When Laurie Kay’s kids were little, she purchased a “create your own creature” kit for them to do together. The kids were uninterested, so Laurie enjoyed doing the craft alone.

“I enjoyed making the monster anyway because it didn’t have to be perfect. I could make it any way I wanted,” she says. “I made this monster and finished it. It was awesome. It was the first monster I ever made. But, the instructions were unnecessarily complicated, and the kit felt incomplete.”

Laurie ended up crafting two more monsters - one for her newborn nephew and one for a friend who was going through a divorce - and both times gave her a sort of satisfaction she’d never felt before. At the time she lived in Michigan and worked as an automotive product specialist. She traveled around the country attending auto shows during the day and making monsters in her hotel room at night. Laurie wasn’t a crafty person. As someone who never completed art projects, as well as a self-proclaimed “hot mess”, crafting little monsters as gifts provided a new sense of purpose.

“I was making monsters to give to other people. I’d bring supplies to auto shows and I’d end up with ten people up until three in the morning making monsters. It was fun to create a community of people making something,” she says. “We were in Milwaukee for 12 days one time and my friends and I sat down to figure out what supplies needed to go in a kit - how much thread do we need? How much fabric? What should the instructions say?”

It was then, when the idea for Monsters Made With Love was being born, that Laurie realized she’d never made a monster for herself. In that hotel room in Milwaukee, Laurie did the “deep, dark ugly cry” and made Greta, her one-of-a-kind monster and constant travel companion.

“I use my intuition, so she has three eyes. I love daisies, so she has daisies. I try to be light-hearted, so she has fairy wings,” says Laurie, laughing. “I am embracing my big butt, so she has a booty.”

By 2015, Laurie was living in Florida and had decided to sell her ready-to-make monster kits properly. She trademarked the name and logo, which was drawn by her daughter. She opened a modified shop at her kids’ school, Chocachatti Elementary, which is one of 300 Micro Society schools in the world.

“They had their own form of government and monetary system, so they had businesses they’d run and bank accounts,” she says. “The kids get paid to go to school and to pay taxes, so there were stores where kids could use their micro-money. We ran a store with 22 students three days a week. They had to price the monster kits, market them, and figure out quality control.”

In 2016, Laurie participated in the Makers Faire in Orlando, her first fair experience, as well as the first time she asked makers to name something they like about themselves. It was another step in the right direction, the building of a philosophy that would eventually anchor Monsters Made With Love.

“We had people of all ages sit down to make monsters,” she says. “There was a guy in his mid-20s who sat for three hours to make his monster. There was a third-generation seamstress who made gowns for Disney sit down and say how great it was not to have to be perfect. It’s part of the maker philosophy: it’s not the product you celebrate. It’s the process.”

In 2017, Laurie and her kids moved to Knoxville, a city they chose because of its seasons, affordability, and good schools. She arrived right on time too, just as Mayor Madeline Rogero named Knoxville a Maker City. Laurie attended the Maker City Summit and started making connections. She served on the Mayor’s Maker City Council and joined the Knox Makers. Word of mouth about Monsters Made With Love had begun.

Today, 90 percent of Laurie’s work involves workshops with monster makers of all ages and abilities. Her efforts to inspire “sewing with a self-love twist” has morphed into art therapy and the deep work of self-acceptance. She holds regular workshops for the general public but also spends time in classrooms, nonprofits, group homes, and places of healing.

“I teach the exact same class to four-year-olds that I teach to corporate executives at team-building events,” she says. “They learn everything from threading a needle and tying knots to identifying something they love about themselves. I use a very simple pattern, so while they all have the same starting place, the monsters look totally different.”

On February 7, Laurie is hosting the First Annual Monsters at Dogwood Arts Exhibition as part of the First Friday Celebration, where 30 local makers and artists will showcase their monster creations in the medium of their choice. They’ll also create their own monsters from a Monster Made With Love kit to auction off for charity.

“When I moved here, I thought I’d be selling cars,” she says, beaming. “I love what I do so much.”

Monsters Made With Love Philosophy

Make the first monster for yourself. List three things to love about yourself. Make your monster perfectly imperfect.