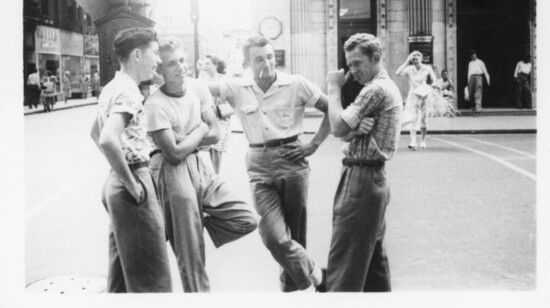 We hope you enjoy this monthly sampler from Knoxville History Project’s "Knoxville Shoebox" collection. We are always on the lookout for old family and personal pictures--especially when there’s something distinctly Knoxvillian about them. Our goal is to help fill in the many gaps in the photographic record of our city’s past.

If you have interesting old photographs of your own, from any era, we’d love to hear from you. You show us the photograph, we copy it and give the original back to you. We preserve and archive the image and make it available for researchers of the future, always crediting your contribution. Sharing is easy—and we’ll do our best to make your images immortal!

Downtown resident Jack Willard, who lived at the Glencoe Apartments on State Street, took this photograph of his “Gang” (as it states in his handwritten on the reverse) around 1948. Only two of the young men’s names are known: Bob Carter is leaning on the post; on the far right is C. Black Jr. (Do you know them?) In the background, the Holston Bank Building, as it’s known today, was then the Hamilton National Bank. Shared by Jacki Willard.

In April 1966, Miss Universe Apasra Hongsakula of Thailand came to Knoxville as part of a world tour. City officials and community leaders ensured that she got a good look at Knoxville during her visit here. Met by Mayor Leonard Rogers at the airport, Miss Hongsakula experienced the Dogwood Arts Trail through Sequoyah Hills, visited children at East Tennessee Children’s Hospital, and met with students at the University of Tennessee’s Student Center, where this photograph was taken, before being whistled off to Oak Ridge for a visit to the Museum of Atomic Energy. Her visit ended with a reception at the Andrew Johnson Hotel where she was presented with a copy of Carlos Campbell’s popular Great Smoky Wildflowers book. Shared by John Slaten.

Dapper dressers have been depicted in many old Knoxville postcards, including this one from the Appalachian Exposition at Chilhowee Park. Knoxville held two such expositions in 1910 and 1911 and hosted a grander one, the National Conservation Exposition in 1913. Chilhowee Park was a popular destination, especially as the Magnolia Avenue streetcar allowed an easy way to get there from downtown. On opening day in 1910, activities included: opening of the “Midway Jungle”, opening of the races at Cal Johnson’s racetrack, skating on high wire, launching of Stroebel’s mammoth dirigible, and a fireworks show, claimed by promoters to be the “greatest display in the South.” Shared by Adrienne Webster from the Lib Cooper Knoxville Digital Postcard Collection.

Gideon Fryer (1921-2014), a longtime professor of social work at the University of Tennessee, became known as a stubborn advocate for civil rights and other causes for most of his 93 years. He co-founded the East Tennessee Community Design center in 1970 and was a major supporter of Laurel Theatre in Fort Sanders. This photograph, discovered among some old books in a house in Murfreesboro, shows a young Gid at an uncustomary formal occasion around 1940. Shared by Emily Hunton.

LEGEND OF THE GOLD BRICKS

The Legend of the Gold Bricks is a collection of freshly researched stories written by Jack Neely highlighting the remarkable history and culture of Knoxville, including: Just a Parking Garage? Pryor Brown and the Legend of the Gold Brick’s; The Advent of Electric Illumination in Knoxville; Suttree Landing: Cal Johnson’s First Speedway; Our Man in Havana: James Agee’s One Drink at Sloppy Joe’s; The Night the FBI Collared at Nazi Spy at the YMCA; and other illustrated stories. Only available at Union Ave Books and knoxvilehistoryproject.org priced just $10.95

The Knoxville History Project is an educational nonprofit with a mission to research, preserve, and promote the history and culture of Knoxville. KHP gives talks and presentations (in-person and on Zoom), creates books, and engages the public online through stories, oral history conversations, driving tours and much more.

Please help us connect more Knoxvillians and visitors to the history of the city by making a donation to support the work of the Knoxville History Project at KnoxvilleHistoryProject.org/KHP-Donations