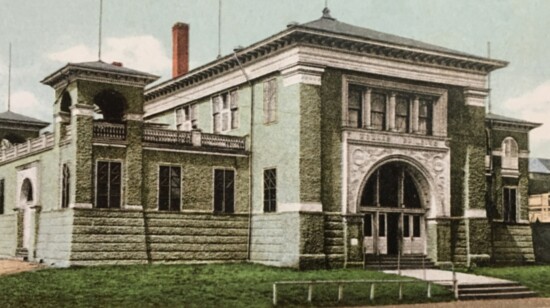 The following images were shared by members of the community with the Knoxville History Project as part of an ongoing effort to expand what we know visually about the history of culture of the city.

If you have interesting old photographs of your own, from any era, we would love to hear from you and potentially include them here in this series. Please contact Paul James at the Knoxville History Project at (865) 337-7723 or Paul@KnoxHistoryProject.org. Learn more at KnoxvilleHistoryProject.org/Knoxville-Shoebox.

The Woman's Building stood on Main Street almost directly opposite the Knox County Courthouse on Main Street. Built to be the Knoxville Pavilion at the Tennessee Centennial Exposition in Nashville in 1897, it was acquired by women's groups and moved almost 200 miles to downtown Knoxville, where it became a de facto art gallery, musical auditorium, and lecture hall. From a distance the Woman's Building looked like a marble temple, but it was actually built of wood. On Christmas night in 1906, it caught fire, perhaps as the result of celebratory fireworks, and burned to the ground. Shared by Cindy and Mark Proteau.

Martha Thompson, known as “Myssie” was a remarkable woman from Anderson County who borrowed money during the Great Depression to build several log cabins in the woods off Candora Road in South Knoxville. The enclave, later to be called Loghaven, was popular over the years with an eclectic mix of journalists, architects, and doctors. Martha is seen here with her dog, Tonto, around 1940. Loghaven was purchased by the Aslan Foundation in recent years and has been converted into a 90-acre artist residency.  Shared by Richard C. Thompson.

Coca-Cola had been available in Knoxville in the late 1800s but only as a fountain drink. That changed here locally when James Patrick Roddy, Sr. began bottling it by hand around 1904. By the 1930s, as seen here, images of attractive women were used to promote the now ubiquitous soft drink, as seen here on the corner of Clinch Avenue and Locust Street. The use of this corner is very similar today – it is a modern parking garage. From the Post Sign Company Collection at KHP.

The Bottom, a neighborhood just east of what we know as the Old City, experienced floods more than once a year when First Creek would swell its banks with seasonal rains. During these challenging weather events, some residents used small boats to navigate the area. For mothers already living below the poverty line, like this woman seen here during the 1930s, these adverse conditions were especially challenging. The Bottom, like other areas on the east side of downtown, was mostly demolished during Urban Renewal, which changed the nature of this and a few other parts of Knoxville from the 1950s to the 1970s.  Shared by Cindy and Mark Proteau.

Each year, KHP researches and produces a new story collection about Knoxvillians of the past. These people often have little in common except that they interacted with this city at pivotal times. The first two volumes, Knoxville Lives I and II, include biographical narratives on Isaac Gammon, one of the first elected Black city councilmen in the United States; Jim Thompson, a commercial photographer who helped create a new national park in the Smokies; a journeyman fiddler, Newman Wise, who’s treasure trove of forgotten recordings highlights Knoxville’s influential musicians; and a look at local lives during the roaring Twenties here in Knoxville.

The Knoxville History Project is a local educational nonprofit with a mission to research, preserve and promote the history and culture of Knoxville. KHP gives talks, presentations, writes books, and engages the public online through stories, oral history conversations, driving tours and much more. Learn more at KnoxvilleHistoryProject.org.