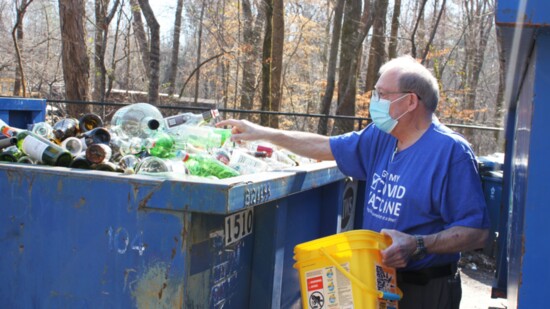 A tarp filled with blood and hair, IV tubing, toilets and a backyard playhouse sound like props for a horror movie.  But this frightening list includes only a few of the random non-recyclables that wind up at the McIntosh Trail Recycling Center in Peachtree City.

When police confirmed the blood and hair in the tarp were from a deer, Al Yougel, executive director of Keep Peachtree City Beautiful, which operates the center, was relieved.

“We welcome people who recycle, even if they’re from outside the Peachtree City limits, but we don’t want people using it as a trash dump,” Yougel said.

As someone who had worked for international companies and owned a travel agency for 30 years, Yougel has admired recycling programs in other parts of the world.  After retirement, he started picking up litter while walking his dog.  “I have this thing about litter,” he said.  When city leaders recognized a need to address the city’s growing litter problem, then mayor, Harold Logsdon, who had seen Yougel’s roadside efforts, asked if he’d be interested in starting a local chapter of Keep America Beautiful. Eager to become more involved in the community, Yougel agreed.

When the chapter started in 2008, only aluminum cans were recycled, and no recycling records were being kept. After the city streamlined trash pickup to three companies and required them to offer free curbside recycling, Yougel estimates that up until three years ago when curbside recyclers stopped accepting glass, Peachtree City homeowners had increased recycling to about 25 percent.

Recyclables are considered a commodity and Yougel explains that glass, often broken in the single stream recycling trucks was ruining other recyclables.  When commodity prices dropped, recyclers could no longer afford to collect glass.

Although no longer collected curbside, the McIntosh Trail Center, open 24-hours a day, still accepts glass, something Yougel said they can do because of their close proximity to Strategic Materials, a glass recycling facility in College Park. Last year, 411,380 pounds of glass was collected. “It’s encouraging that some make the effort to bring glass to the center,” he said.

The center also accepts paper and cardboard as well as books. During the Covid pandemic, and the associated increase of online ordering, cardboard recycling at the center skyrocketed. In 2020, 595,400 pounds of cardboard was collected.

As a non-profit entity, the Center receives a small portion of the profits of selling recyclables to cover the costs of renting a compactor and having the recyclables hauled away.

Where Does It Go?

Recyclables in Fayette County, collected at recycling centers as well as curbside, are hauled to material recovery facilities. These mrf’s, pronounced “murfs,” include facilities such as Pratt and Westrock in the Atlanta area and RePower South in Montgomery. There, after workers remove large items and materials that can tangle machinery, recyclables travel through a series of screens, blowers, magnets and optical scanners that sort them.  After being compressed and baled, they are sold to companies that will turn them into new products.

As interest in recycling has increased, markets for some materials have decreased, particularly since China stopped accepting imported plastics in 2017 that were cost-prohibitive to recycle and causing environmental problems.  This has made it difficult for mrf’s to find markets for certain plastics. Yougel said curbside recyclers are mostly interested in plastics marked 1 and 2. These include items such as water and detergent bottles. Sorted items that cannot be sold as commodities may wind up in the landfill or burned as fuel.

Can We Do Better?

Although local recycling programs are far behind the gold standards in places like Germany and Spain, Yougel is proud of the progress made with Keep Peachtree City Beautiful. In the future he would like to see a commercial recycling program for businesses and industry in the area. He would also like to see more people committed to curbside recycling. “I don’t expect 100 percent participation,” he said, “but if you go down the street on trash and recycling day, maybe not even 50 percent have recycling out.”

For more information about Keep Peachtree City Beautiful or to volunteer call 770-632-3195.