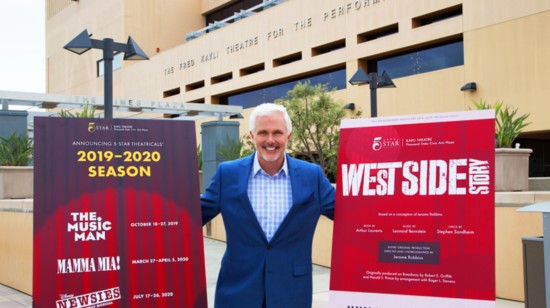 Broadway in Your Backyard:

5-Star Theatricals Lights Up the Stage

5-Star Theatricals, the Ovation Award-winning resident musical theatre company of the Thousand Oaks Civic Arts Plaza, is a nonprofit organization with a mission to provide the highest-quality theatre experience as well as serve their community with the many outreach programs they offer.

“When people come to see our shows, they see the highest standard of quality, just like Broadway,” says Patrick Cassidy, of Thousand Oaks, who serves as artistic director at the helm alongside Cindy Murray, executive director.

“We have a full orchestra with up to 22 musicians, Broadway sets and costumes and the best talent around,” Cassidy notes. “You don’t get that anywhere up here—you would have to drive down to Los Angeles to the Ahmanson to get anything comparable.”

5-Star Theatricals—formerly Cabrillo Music Theatre—has been the resident musical theatre company of the Thousand Oaks Civic Arts Plaza for the past 25 years, and as such, the company makes it a priority to serve its community.

5-Star Theatricals’ next big production is “West Side Story,” which opens July 26 and runs through August 4.

“It’s going to be one of the last live productions of the show for the next couple of years in the Los Angeles area due to Steven Spielberg directing a movie remake of it, so people won’t get to see it on stage for quite some time,” Cassidy says.

The show will feature a cast of 33 members, as well as a 20-piece orchestra, making it a “supreme Broadway-caliber musical,” he notes.

The 2019-2020 season “is going to be very special,” Cassidy notes, because it’s the 25th anniversary of the Thousand Oaks Civic Arts Plaza, and the 25th season of 5-Star Theatricals being the resident theatre company in the Kavli Theatre at the Plaza.

“When I was thinking about what shows to plan, I came up with ideas that represented the 25 years,” says Cassidy, noting that the fall show, “The Music Man,” will run from October 18 through 27. “That’s the first show we did at the Kavli 25 years ago, and ‘The Music Man,’ personally, is very close to my heart because my mother, Shirley Jones, plays Marian the librarian in the movie.

In 2020, from March 27 through April 5, the ever-popular 2008 jukebox ABBA musical romantic comedy “Mama Mia” will take the stage, followed by “Newsies,”  the musical based on the real-life Newsboys Strike of 1899 in New York City, from July 17 through 26.

In addition to stellar productions, 5-Star Theatricals will present their fundraising gala in January 2019, called “5 Stars for 5 Stars,” featuring five major talents singing with a live orchestra. Cassidy says the motto of 5-Star Theatricals for the past few years has been “Broadway in your backyard.”

“That’s essentially what we are, right here,” he notes.

As a nonprofit organization, 5-Star Theatricals is involved with outreach efforts, including putting on a holiday show every December at the naval base in Port Hueneme, in which volunteers present a full production, featuring stars from past shows, youth performance groups, Santa Claus and other holiday characters.

“It’s one of the most important and rewarding things we do,” Cassidy emphasizes. “We’re there with families—mothers and fathers with children by themselves—waiting for their spouses to come home. All of our performers donate their time and talent and it’s a truly beautiful production.”

In other philanthropic endeavors, 5-Star Theatricals features the Starlight Teens and Singers, comprised of more than 60 children between the ages of 8 and 14, who perform for free at senior citizen facilities in the Conejo Valley and beyond, as well as for Rotary Clubs in town. There are no fees to participate in Starlight Teens and Singers, and the performers are encouraged to further their education and experience with other groups, shows and entertainment, and to bring that experience back to Starlight Teens and Singers. Education is a key component, as they are taught a variety of material and songs, learning various styles and discovering great music of earlier eras. But even more importantly, 5-Star is teaching the youth to serve their community, Murray notes.

Additionally, 5-Star Theatricals does outreach through its Adopt-A-Bus program, which gives children who have never seen a musical the opportunity to see a production for free. Last year they had 800 children in attendance and plan to continue to grow this program with the help of the community.

5-Star Theatricals also offers the 5-Star Academy of Performing Arts, an extensive and professional theatrical training ground for youth that fosters connections between theatre performance and the Conejo Valley/Ventura County community. The program aims to introduce children and teens to professional theatre and give them the opportunity to develop into skilled actors for main stage productions and beyond. Through work in the classroom, onstage and in the community, the program strives to develop future theatre leaders by offering a program led by industry professionals. In addition to offering ongoing classes each session, 5-Star offers master classes with theatre professionals—actors, choreographers, casting directors, agents/managers, musical directors and more—providing kids and teens in the community an opportunity for top-notch expert feedback.

In other offerings, 5-Star Theatricals presents a signed performance for the deaf and hard-of-hearing for each production. This performance, which takes place on the first Saturday matinee of each run, also contains an educational component, in which professional signers are paired with students learning the craft of signing musicals through their participation with 5-Star Theatricals, which has a focused commitment to making musical theatre accessible for everyone.

“Our company is about connection to the community… so they know it’s their company because that’s what we represent,” Cassidy says.