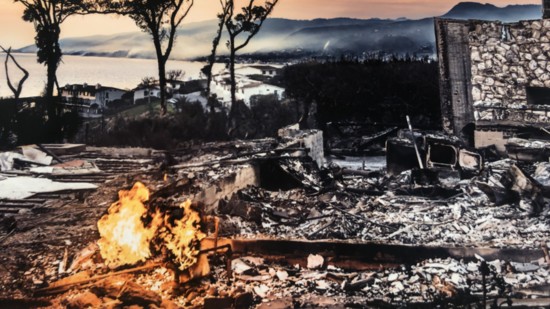 "Once the storm is over, you won't remember how you made it through, how you managed to survive. But, one thing certain: when you come out of the storm, you won't be the same person that walked in. That's what this storm is all about.”

This quote by writer Haruki Murakami inspired Malibu artist Bibi Jordan to contribute her photograph, “She Will Rise,” and film about the firestorm to the “Radical Beauty: Malibu Rising” collaborative community exhibition featuring a variety of paintings, photography, sculptures, short films, written work, poetry and other art created in response to last year’s devastating Woolsey Fire.

“My 'storm’ was the Woolsey Fire, and if that's the worst thing in my life, I'll be lucky. But, it did change me... for better and for worse,” says Jordan, who designed her pieces to “invite viewers to explore the transformative power of adversity.”

“As a photographer and writer, it was natural for me to turn to my camera to express feelings ignited by the fire,” explains Jordan, remembering, “the fire burned away the ground cover and some of the understory that had adorned my persona. The bare bones of my being are now more apparent. I won't tolerate being trampled on or put up with smoke and mirrors. I want to stay true to myself and celebrating every day of my life. The poet Rumi expressed it best: ‘Before death takes away what you are given, give away what there is to give.’”

Jordan, along with hundreds of area residents, suffered tremendous losses from the fire but is nevertheless able to reflect optimistically.

“The Woolsey Fire burned my possessions, but it illuminated assets I consequently value more and now give freely—time, opportunity and generosity—as well as those elements that have always been touchstones—family, travel and nature,” she adds.

Jordan hopes her photograph will help others come to terms with their own experiences.

“I invite others to consider what was their own personal 'storm’, how it transformed them and what is the one sure truth they learned from weathering the storm,” says Jordan.

For sculptor and 28-year Malibu resident Eugenie Spirito, living through the terror and aftermath of one of Malibu’s worst wildfire’s on record yielded deep lessons.

“Sometimes it takes a disaster—like last year’s Woolsey Fire—to reawaken those qualities in us and unite us to face adversity,” Spirito shares. “This is what Malibu, and all the towns affected by the Woolsey Fire, need—to be united with compassion, and it’s what we are seeing” one year later.

Spirito’s “Angel From The Ashes” sculpted for the exhibit “personifies the powerful nature of angels. They are kind and compassionate, always supportive, and yet also indestructible,” says Spirito, noting that the fire also sparked the creation of nonprofit organization, ComeTogether, which is dedicated to “healing and uniting through art all those affected by the Woolsey Fires.”

Malibu artist Henry Hungerland painted “The Day After” to illustrate the collective angst fueled by the destructive wildfire.

“Friends of ours asked us to check on their home on Point Dume; unfortunately, this is what we found: home after home burned to the ground,” Hungerland recalls. And still, “It wasn't over yet, as we saw several intact homes go up in flames 48 hours after the fire, ignited by wind-driven embers,” he adds.

A music video and song, “No Place Like Home,” by Reider Larsen was also previewed during the reception, as well as an interactive listening post and story weave by the Laughing Dog Story Bus and film screenings.

The “Radical Beauty: Malibu Rising” exhibit is on display at Malibu City Hall, 23825 Stuart Ranch Road, through December 20. Visitors may view the exhibition Monday through Thursday, 8 a.m. to 5 p.m. and Friday, 8 a.m. to 4 p.m. Admission is free.