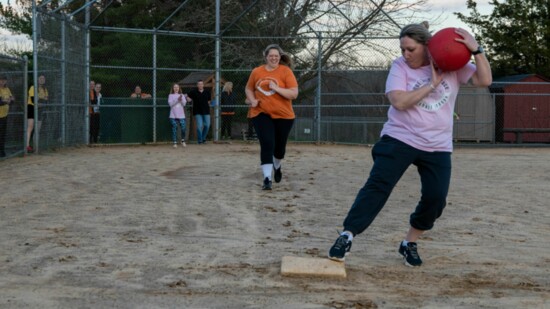 “Not in the Face Kickball” is not the game you played—and perhaps dreaded—in grade school. In this league, 250 women over the age of 40 spend their summer kicking balls, rounding bases, laughing and making new friends as their kids cheer them on.

Nicole Rutigliano, aka “the Commissioner,” is astounded by how her simple desire to get a group of neighborhood women together for pick-up games of kickball last year absolutely exploded into a movement. “I did little advertising—just stuck fliers in mailboxes and posted on social media,” the Martinsville resident says. “Obviously, I struck a nerve. All these women were like me: lonely and tired of sitting at home in our pajamas and missing out on watching our kids play sports due to the pandemic. We started in the neighborhood park, and it was very loose. The thought was: ‘Make it if you can. Don’t worry if you can’t. Bring a friend. Bring grandma. Bring whoever.’”

The idea formed in 2021 when Rutigliano was visiting her sister in North Carolina. “One day, she went to play a pickup kickball game in her community. Her son sent me a video of her playing—and he was laughing in the background. They were having this moment,” Rutigliano says. “I thought how awesome it was that even though moms could not go to their kids’ games, kids could go to something like this and root on their moms.”

As they began playing, word spread and soon 110 women from all backgrounds were calling Rutigliano wanting to join—enough for a whole league.

Last year, there were six teams, all named after ’80s movie classics like “Less Than Zero,” “Sixteen Candles,” “The Breakfast Club,” “St. Elmo’s Fire” and “Pretty in Pink.” Now, the league is up to 20 teams. The teams play a six-week schedule at Chimney Rock Park from mid-June to the end of July, complete with a playoff tournament and championship game.

The name Rutigliano chose—“Not in the Face Kickball”—is an homage to the soccer games she used to play with her kids in the backyard. “They would baby-kick the ball to me, and I’d say, “Kick the ball—but not at my face!’” she says. “I chose the name because it’s hilarious and women our age totally get it. We want to protect our faces at all costs.”

The league became a family affair, with Rutigliano’s three children, aged 16, 18 and 20, jumping in to help her create rules and a logo.

The league is purely recreational and non-judgmental: There are no tryouts or practices and games fit busy moms’ schedules. “My friends and I are not athletic. I didn't even have proper sneakers when I started. We don't care if you have never played before, if you can’t play or if you have to walk,” she says. “When we played kickball in grade school, we had this fear that we’d trip and people would laugh. This is a chance to come back with a vengeance—maybe not as the best player but with the confidence of just getting out of your comfort zone and meeting new people. This is a game you win by having the courage to just come out.”

The only hard rule is participants must be 40 or older. “If you’re over 40, you understand where we all are in life,” explains Rutigliano, who is 52. “The oldest is 72—and she’s really cool.”

Whole groups join the league as teams but there is welcomed space for individual players everywhere. “There’s a hockey mom team. A bunco team. A book club team,” says Rutigliano. “However, if someone joins those teams they feel right at home. The whole point is to meet new women and have fun.”

The best part of the league for Rutigliano is having her kids cheering for her on the sidelines as she did for their games. “They give me advice—‘Kick with the side of your foot!” “Slow down!” ‘Don’t go that far!’—and it makes me laugh because I’d say things like ‘Skate faster!’ to them. Of course, we get that. They don’t need to say it. Now I know how they felt when I said such things to them.”

Find out how to watch a game or join the league by emailing Nitfkickball@gmail.com. 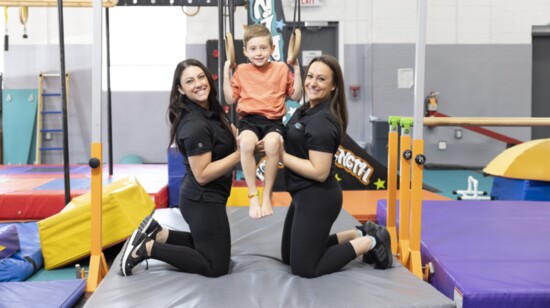