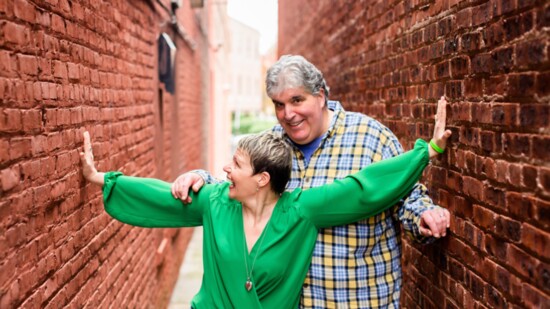 Giving The Gift Of Life

THE EMOTIONAL AND MIRACULOUS BENEFITS OF LIVING ORGAN DONATION

Raymond Brunell and Gwenn Wierzbicki, have always considered themselves to be compatible. Together for 28 years, they still make each other laugh. But it wasn’t until a couple of years ago that the couple found out they were compatible in a way they could have never imagined.

At the age of 42, when Ray started experiencing fatigue and leg and muscle cramps, he went to see his doctor. It was then that he was diagnosed with polycystic kidney disease.

“Polycystic kidney disease is a very common inherited disease,” says Dr. Francis Weng, chief of the Renal and Pancreas Transplant Division at St. Barnabas Medical Center in Livingston. “If one parent has this disease, the kids have a one out of two chance of getting it.

The kidney’s develop cysts. As the cysts grow, the kidneys become larger and at the same time actually function less and less.”

Ray, along with his two brothers, inherited it from their mother. His oldest brother died from complications of the disease, and his other brother has been on dialysis for 13 years.

Dr. Weng states that some people don’t have signs of kidney disease, such as high blood pressure and swelling of the ankles, until it’s more advanced, so it’s important to have regular physical exams to get your blood work and urine checked. Treatment today is much better than it was even a few years ago, so catching it early is imperative.

Six years after being diagnosed, Ray was referred to a nephrologist, or kidney doctor. “He told him, ‘It’s not a matter of if, it’s a matter of when you’re going to be on dialysis or need a new kidney,’” says Gwenn.

When she heard that, she immediately volunteered to give Ray one of her kidneys. The nephrologist recommended a few places for transplant surgery, and after doing research, they felt confident in choosing St. Barnabas.

“We are one of the largest living kidney donor programs in the United States,” says Marie Morgievich, director of clinical services and Living Donor Institute at St. Barnabas.

“This whole journey has been filled with emotions,” says Gwenn. “One of which will always remain is my gratitude for all of the love and support that Ray and I received from our team at St. Barnabas and the Living Donor Institute.”

“Besides getting a kidney that is a better match, pairs may do this to help other pairs who are not compatible,” says Morgievich. “And the compatible pairs who do this are really special because they help unlock transplants for other people.”

The night before surgery, Gwenn packed a bag of things she thought she’d need during her hospital stay, such as pajamas, a phone charger, and snacks.

“And for whatever reason, I packed a strip of fake mustaches,” she says. “I know, completely nutty! Funny enough, I didn't use any of it. The phone charger came in handy, but the most significant item packed was the strip of mustaches!”

After Ray went into the operating room, Gwenn was awaiting her turn. With her sister Karen there, she reached into her bag and pulled out the mustaches.

“We began laughing and taking selfies. After all, isn't that what everyone does while waiting for surgery? Shortly after, my niece, our sister-in-law, and one of my childhood friends joined us in my pre-op room. There was a mustache for everyone.”

“My face was glowing; my hair and nails felt better,” he says. “I could sleep better, and my energy level went through the roof.”

Gwenn also recovered quickly. “I was back to work in about four weeks. I’m a fitness professional and specialize in Classical Pilates. It’s done so non-invasively, and the little scars that I have are barely noticeable.”

Gwenn’s kidney also made a huge difference in the life of her recipient. Although it was supposed to remain confidential, she met her recipient by chance when she heard him speaking to his family in post-op.

“The man reached out his hand for mine and said, ‘Thank you, I feel amazing,’” she says. “He looked at me with such sincere gratitude. It was a beautiful, emotional moment that will remain with me always. And, would you believe, he had a mustache?”

She and Ray are thankful that everything worked out so well. “I did it for us. I love him, and I like him, and 28 years later, I couldn’t imagine my life being shared with anyone else. Ray deserves to live his best life.

“St. Barnabas alone has about 1500 people waiting for a kidney transplant,” says Morgievich. Besides living donations, if someone would like to donate upon their death, they should designate that, she says, and speak with their families about their desires.

“I feel like this story is about giving a gift,” says Gwenn. “If people really do want to make a difference in someone’s life, have more faith than fear.”