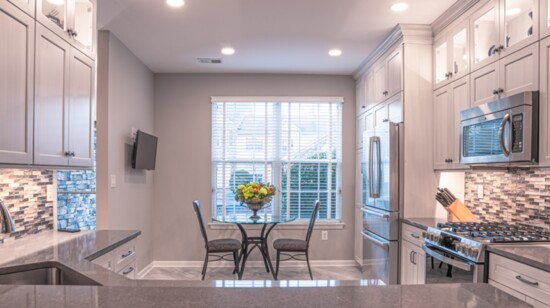 On Time and on Budget with Five Star Home Remodeling

Photography by Tier One Ventures LLC

Michael and Lisa DeGennaro are no strangers to remodeling. Over the years, the Branchburg couple has remodeled kitchens and bathrooms in their home and the home of Michael’s mother. In 2020, they decided it was time to remodel the kitchen and bathroom in the Whitehouse Station townhome they owned and where Lisa’s mother, Angie Daniels, lived. “We wanted my mom to enjoy her space and have a design that would span the test of time,” Lisa says.

A contractor recommended Five Star Home Remodeling in Bridgewater, and once they spoke to President Larry Hopkins, they were sold on working with him. “We liked Larry’s sincerity and knowledge,” Lisa says. “He listened to us and gave suggestions to make our vision more economic and functional. For example, I wanted a tall pantry in the bathroom for towels, but he explained that would close off the room and recommended we put cabinets on the side, which was a better design.”

Since the project required a complete gutting of both rooms, Angie moved in with the DeGennaros, which meant that having the project done on schedule was important. “Larry said it would take six weeks: He started and finished on the days he said he would,” Lisa says. “I have never experienced that with other remodeling projects.”

This professionalism has been long-honed. Larry has been in the housing industry for more than 30 years, previously serving as a manufacturer’s representative selling building supplies to area contractors and doing retail sales for a national chain home remodeling company.

In 2002, he took his destiny into his own hands and founded Five Star Home Remodeling. The company focuses on kitchens and baths and any projects associated with the job, such as additions or merging two bedrooms to create an en suite bathroom with walk-in closets. The company also buys homes to renovate for resale.

Larry runs the company with precision, heeding his mission of getting projects done on time and on budget. Many professionals who work with him have been part of the Five Star Home Remodeling team for over a decade. Over the years, Larry built a business respected by clients as well as by the industry: Remodeling Magazine has recognized Five Star Home Remodeling on its list of “Most Successful Remodelers in America.”

Communication with clients is key to this success. “Remodeling is a process, not an event. It starts with the initial phone call and managing clients’ expectations about what can be done within their budget. I’ve been in the business long enough to tell clients how their project will go and how much it will cost,” Larry says. “When we agree to a project, nothing gets started until everything is in the house and has been inspected for quality.”

Lisa was especially pleased with Larry’s reliability and responsiveness. “His coordination of everyone from contractors to inspectors was impressive,” she says. “We had zero downtime and a flawless execution.”

When interviewing remodelers, Larry recommends people inquire if the company has done that type of project, how it handled challenges, and how long it took. Feeling at ease is important, too. “These people are going to be in your house for six to eight weeks. Do you trust them?” he asks.

Lisa adds that people should price products on their own to have realistic financial expectations before talking to remodelers. “Don’t get into the pitfall of watching home shows and think you can remodel your house for the price they say — those are so wrong,” she says.

Lisa and Michael had a clear concept for Angie’s kitchen and bath, which Lisa sketched out. They wanted a “spa-esque” bathroom with grays and whites to brighten it and make it look spacious. Larry added elegance with clean lines, accomplished by an undermount bathtub and frameless shower stall.

To harmonize the kitchen’s gray-and-white palette with the townhome’s warm colors, the couple selected a quartz countertop and backsplash with hints of brown, which softened the cool tones. Since the cabinets reached the kitchen’s 9-foot ceilings, Larry placed glass doors on the uppermost level with lighting. “This adds an accent to the room, which makes it look twice as big,” he says. “It sets the tone for the whole kitchen.”

During the remodel, Angie approved design choices but was not allowed to see the project until it was complete. “When she walked into her home for the first time, she gasped,” Lisa says. “Every day she still tells me something new she loves about the remodel.”

To learn more about what Five Star Home Remodeling could do for your home visit fivestarhomeremodeling.com.