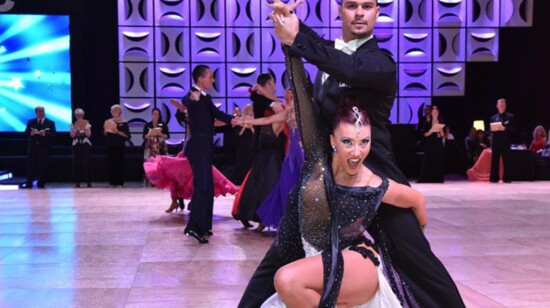 Article by Nancy A. Ruhling

“Ballroom dancing,” declares Michelle Garced, “will change your life. It will make you look better and feel better, and it will keep your brain sharp.”

Michelle and her light-fantastic feet are proof-positive of the transformative sway of the swing, the rhythm of the rumba and the red-hot-heartthrob of the Argentine tango.

She and her husband, Emilio, who met on the dance floor and have been cha-chaing together for nearly a half-century, are the longtime owners of three award-winning Arthur Murray Dance Centers.

When Emilio waltzed into her life, Michelle was a manager at an Arthur Murray studio in Jersey City.

“We turned him away because he wasn’t 18,” Michelle says. “A year later, he came back—on his birthday—because he wanted to learn the hustle and the salsa, which were quite popular then.”

After a few lessons, Emilio was so hooked that he signed on as an instructor.

In less time than it takes to do the two-step, friendship turned to romance, and five years later, they were married.

Their daughters followed their lead. Christina and her husband, Leo, have won many championship titles over the years, and Anneliese helps out with administrative tasks for the business.

“Emilio and I used to work all day at the studio and dance all night,” Michelle says. “He’s the greatest partner. We work well on the dance floor and in the workplace.”

They opened their first studio, in Highland Park, in 1982. They added the Green Brook location in 1998 and the Manalapan one in 2017.

At their Arthur Murray Dance Centers, the only ones in central New Jersey, students from 8 to 98 literally walk in and come out dancing.

“Whether they are championship or casual dancers, whether they are widows starting over or people who need to know how to dance for a special occasion like a wedding, it gives them a sense of accomplishment,” Michelle says.

Many students start with a sample lesson then sign on for programs that allow them to discover which dances they want to concentrate on.

“We’re a dance family, and we host social dancing events for our students,” Michelle says. “We teach a lot of couples classes, but you don’t need a partner. You can dance with an instructor.”

The social aspects of ballroom dancing have made the pastime particularly popular post-pandemic.

“People find that it builds self-confidence and helps them get back into things after being isolated for such a long time,” she says. “The number of people who are coming has doubled in volume because they appreciate what was taken away during the COVID lockdowns.”

Michelle, who is 69, and Emilio, who is 61, still make time to dance together when they’re not teaching classes, training teachers or taking courses.

They have no intention of ever stepping back from the business.

“We love what we do,” Michelle says. “In addition to teaching tried-and-true traditional dances and fad dances, we teach manners and etiquette. We are the last stronghold of the social graces; we have to keep the tradition alive.”

Michelle and Emilio just had their first grandchild, and it goes without saying that her first steps will be on the dance floor.

“She’s only six months old,” Michelle says, “but that will happen.”