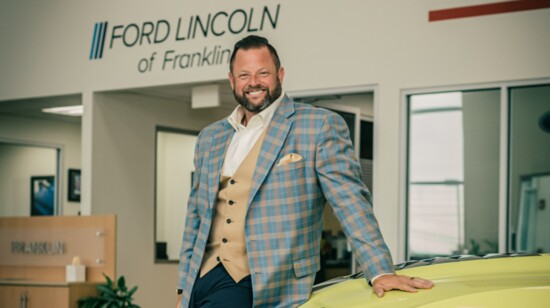 Grassi explains, "I wasn't the greatest student and it was very much a struggle to comprehend and learn because I was different than everybody else."

The path to owning two car dealerships took the father of three from NY to California to Phoenix to Tennessee. While still in NY, he landed his first selling job, selling suits.

His Dad eventually moved out to to San Diego, California and Grassi went with him. He says, "I got a job delivering pizza for Pizza Hut. Then got a job as a busboy at a steakhouse. I was a hustler and making pretty good money. I eventually learned how to DJ and started doing some bar back stuff. Life was good. Then one night I met a finance manager from a car dealership who said to me, 'If you cut that hair and take those earrings out of your ears, you could probably make more money than you ever thought you could make because I see how you work these tables.'"

Sage advice. But while Grassi didn't immediately cut his hair, he did eventually start at a small Volkswagen dealership and sold his first car in his first 48 hours on the job. He says, "I'll make a long story short. I made $500 bucks. And that $500 was a lifetime. And that's what put me here today."

Grassi continues, "Cars are just a commodity. You have to sell yourself, have a passion for what your product is about, sell the company. It's a heartbeat."

Does he have advice for budding entrepreneurs? Grassi replies, "Entrepreneurs are not born. They are bred. You have to have a passion down deep inside. It's not something you thought about. Like me, I didn't think I wanted to be in the car business. But my passion was to get out of my comfort zone and to grow. And I knew that's what I had to do to make more money."

He worked through the ranks in California and Phoenix, holding titles of finance manager, sales manager and general sales manager. Grassi found the right ownership opportunity here in Middle Tennessee when he purchased the Infinity dealership 10 years ago and the Ford dealership four years ago.

So what does he do to unwind? Grassi reveals, "I'm very much in to fitness. I eat very well and take care of my body. In 2014, I lost 120 pounds. When I went in to a gym for the first time, I immediately saw some aesthetic gains." He adds, "I also have a nine-year-old Bouvier dog that is my life."

Sounds like the father to three daughters, three grandkids, and husband for 25 years is living his life with a passion.