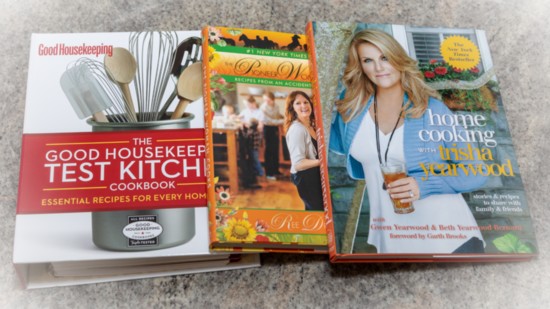 Several years ago, many food industry prognosticators forecast the demise of old-fashioned hardcover cookbooks. Given the rapid growth of e-readers and social media sites such as Facebook and Pinterest, it seemed that the days of physical cookbooks were numbered.

However, in recent years, these predictions have proven to be inaccurate. Fueled by the rise in television food networks and the star power of celebrity chefs, cookbooks have never been more popular.

No doubt about it, there is just something special and comforting about the feel of a traditional cookbook. Here’s a look at three best-sellers that belong in every kitchen.

1. Home Cooking with Trisha Yearwood: Stories and Recipes to Share with Family and Friends

Country music star and Food Network host Trisha Yearwood has released another best-selling cookbook that is filled with comfort-food recipes based upon her family traditions. Her most popular recipes include Mama’s homemade waffles, twice-baked potatoes and Key lime cake.

2. The Pioneer Woman Cooks: Recipes from an Accidental Country Girl

Children’s author and Food Network host Ree Drummond, aka The Pioneer Woman, has published the latest in her series of cookbooks dedicated to comfort food and country cooking. Her recipes include basic breakfast potatoes, spicy pulled pork and chicken-fried steak.