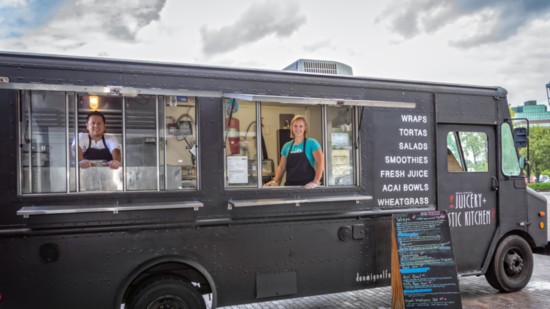 Fresh, Healthy Food on the Go

Miguel Martinez began his career in the food business in San Diego almost 20 years ago, following in the footsteps of his grandfather and his father. He worked at several different upscale eateries over the years, learning every aspect of restaurant life, including serving, cooking and managing the business. Over time, his love of the food business became a family passion as he met and married his wife, Jacki,e while working as a server at the Hotel del Coronado in San Diego.

After moving from San Diego to Nashville, Miguel decided to start a healthy food truck business. Although he was confident in his restaurant skills and experience, he knew that he would be taking a risk. He was well aware that the food truck industry has traditionally been dominated by venues serving barbecue, fried foods and desserts. By offering a Baja coastal menu featuring light, healthy foods, juices and smoothies, he would be navigating uncharted territory, particularly in Middle Tennessee.

“So much of the food truck scene is dominated by barbecue, burgers and heavy foods. We knew that by offering only healthy foods, juices and smoothies, we would be taking a risk, but we felt it was worth it,” Miguel says.

However, Miguel was not to be deterred. He started Don Miguel’s Juicery + Rustic Kitchen in Hendersonville in 2015. He was committed to serving a healthy menu using locally sourced ingredients that were prepared fresh each day.

At first, Miguel tested out his concept at the local Hendersonville farmers market. To his delight, his menu of fresh wraps, tortas, juices and açai bowls proved to be very popular with the locals. It did not take long before happy customers began spreading the word about his food. Soon afterward, Regina Gammons, owner of Hendersonville Produce, offered him the opportunity to park his food truck at her store on a regular basis, giving his business even more exposure.

Today, Miguel and Jackie take their food truck on the road each week to a variety of Middle Tennessee locations. They have developed a loyal group of customers who eagerly await their regular visits at local business sites. During their busy season, May through October, the Miguel and Jackie serve at least four to six times each week. In addition, they also work a large number of outdoor festivals and fitness events each year.

“We are not your typical food truck, and that makes it exciting,” he says.

Music Speakers: The truck features external speakers that are used to play playlists of rock 'n' roll and Spanish music to help draw in crowds.

Fire Suppression System: The truck has a state-of-the-art fire suppression system designed to comply with all applicable state and local fire codes.

Orders/Serving Windows: The truck features two windows that can be used to both take orders and to serve food. The space has been designed so that the entire truck can be operated by only two people.

Propane Tank Access: The truck has a special covered door to provide easy access to the propane tank used to fuel the kitchen’s grill.

Menu Board: Like most food trucks, Don Miguel’s features a menu board that can be updated as needed to reflect changing food and drink offerings.

Air Conditioner: The truck features a custom air conditioner designed to keep the temperatures inside the kitchen comfortable for the two operators.