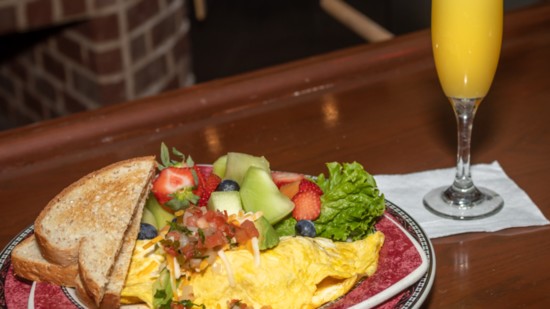 Going On A Safari

Great Food and Drink Are Just a Short Junket Away

Picture yourself hard at work when your mind begins to wander. As you sail off into a daydream, you begin to hear the sounds of lions growling, snakes hissing and the steady beat of distant drums.

Suddenly, you snap back into reality. You realize that that the sounds you imagined weren’t jungle sounds at all. Instead, the growls were coming from your hungry stomach. The hissing sounds came from imagining steaks sizzling on a grill. And the drumbeats? They were actually the sounds of ice cubes tumbling into your favorite cocktail.

All at once, you understand the meaning of your daydream. You are hungry, and it is your body’s way of telling you that it’s time to go on a safari to your favorite restaurant.

Fortunately, you won’t have to travel to the plains of the Serengeti to quench your thirst and your hunger. Instead, your destination is nearby in Hendersonville at Safari’s Brick Oven & Grill.

Owner Ross El-Bobou is a longtime restauranteur who began his food service career in 1983, working part-time at the old Po’ Folks restaurant in Madison. After a while, he moved over to the former Major Wallaby’s restaurant in the Rivergate area.

“I was going to college at Tennessee Tech at that time, working on my civil engineering degree,” recalls Ross. “Classes in the daytime and working as a server at night – that was my routine for several years.”

In 1989, Ross graduated from college with his degree, and he found a job as an engineer with the State of Tennessee. However, even after starting to work for the state, he continued to work as a waiter at Major Wallaby’s at night.

“It was a strange time,” says Ross. “I was making more money waiting tables part-time at the restaurant than I was working fulltime at the state.”

Before long, the owner of Major Wallaby’s made Ross an interesting offer. He wanted Ross to give up his day job and come to work for him as a fulltime restaurant manager. At first, Ross turned him down.

“I had spent a lot of years earning my engineering degree,” says Ross. “So why would I want to give it up and work fulltime in a restaurant?”

Then, the owner made him an offer that he couldn’t refuse.

“He told me that he wanted me to become his general manager,” says Ross. “Moreover, he would double the salary that I was getting paid by the state.”

After talking it over with his wife, Lisa, Ross decided to accept the offer.

Several years later, the owner of Major Wallaby’s sold the restaurant to a new owner.

While concerned at first, Ross was assured by the new owner that he was not going to change anything about the restaurant. Moreover, he was going to expand the concept by opening new locations, and he wanted Ross to become a partner in the venture.

At first, everything went well. However, Ross and his partner soon began to disagree about business issues on a regular basis.

“I’m a hands-on manager and I like to know how everything works in the restaurant – to understand all the processes,” recalls Ross. “However, my partner had always worked in an office, and he didn’t really understand the ins and outs of restaurant operations, so we clashed.”

After growing tired of the tension, Ross left the company, and the restaurant went out of business six months later in 1992. With the demise of Major Wallaby’s, Ross seized the opportunity to open his own restaurant, called Safari’s, in the same location.

Business at Safari’s grew steadily for the first few years. However, it soon began to taper off as the Rivergate area went into a decline. With a shrinking customer base, Ross closed Safari’s in 2006.

Over the next 10 years, Ross worked for several large restaurant corporate operations groups, including Crackerbarrel, Logan’s Roadhouse and O’Charley’s.

“Despite having to close my restaurant, the business was in my blood,” says Ross.

However, he received another opportunity to own his own restaurant, and he opened the new Safari’s Brick Oven & Grill in Hendersonville in 2016.

“Although I enjoyed my time in corporate, I missed owning my own store,” says Ross. “I love free enterprise and being an entrepreneur; that’s where my heart is.”

Today, Safari’s Brick Oven & Grill is thriving, thanks to the hard work of Ross and his team. Like its predecessor at Rivergate, the new location is famous for its expansive food and drink menu that includes a wide array of burgers, salads, seafood, fajitas, chicken dishes and brick oven-cooked pizzas and calzones. In addition, the restaurant offers some of the most sumptuous steaks around, including porterhouse, ribeye, sirloin and prime rib cuts.

So, the next time you hear the sounds of far-off drums and the call of the wild, you will know that it is a time to take a trek to Safari’s Brick Oven & Grill.