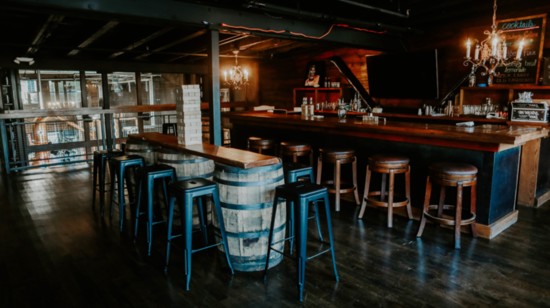 In the beginning, there was the water, naturally filtered and mineral-rich, a gift of the limestone formations of Lynville, Tennessee. Master distiller Clay Cutler chose this place to set up shop, creating Tenn South Distillery and crafting world-class spirits second to none: All Mighty Shine 140, Abernathy New American Gin and the award-winning Clayton James Tennessee Whiskey.

But talent attracts talent, and music mogul Scott Borchetta, the founder of Big Machine Records, soon wanted in. In 2015, he acquired Tenn South Distillery and invited his brother, Mark, a Los Angeles movie producer with his own advertising agency, to oversee operations. It was a good call. The Borchetta brothers’ entrepreneurial acumen, mixed with Clay’s supreme artisanship, has proved a potent cocktail for success, resulting in phenomenal growth.

A big driver of that success was the introduction of a sister spirit to the ones Tenn South was already making: Big Machine Platinum Filtered Premium Vodka. Distilled 25 times—four to five times more than typical vodkas—and then trickled three times through a proprietary, platinum bead filtration system (the only one of its kind in the world), some argue that Big Machine Vodka is the purest, smoothest, cleanest-finishing vodka available on the planet.

To test this proposition, one could do no better than to round up some friends and pay a visit to one of Big Machine’s two local tasting rooms. Big Machine Store and Tenn South Distillery are located in the heart of downtown, a venue with live music, karaoke and a working distillery, allowing guests the opportunity to bottle their own Big Machine Vodka or Single Barrel Clayton James Tennessee Whiskey straight from the barrel.

If it's not a full bottle desired, all the Tenn South Distillery spirits are available by the shot or in mixed cocktails, including their "Soon-to-Be World-Famous Frozen Vodka Lemonade Slushies." Tasting tours are available, at 45 minutes each, that include four samples and a mini cocktail, a value at only $15 and cheaper than downtown parking.

Big Machine's second tasting room is even more convenient to Brentwood. It's located in Berry Hill, with the same world-class spirits at their downtown location along with great food and live music.

2009: Tennessee enacts legislation to legalize distilleries in 41 counties, opening the door for the creation of the Tenn South Distillery.

2012: Tenn South Distillery purchases an idyllic 28 acres in Giles County near Lynnville. With its water naturally filtered through limestone formations, the location is ideal for the production of world-class spirits.

2013: Tenn South Distillery distills and barrels first spirits, leaving the Clayton James Tennessee Whiskey to age in the barrels, but bringing to market their unaged All Mighty Shine 140, a 50% corn, 50% cane moonshine.