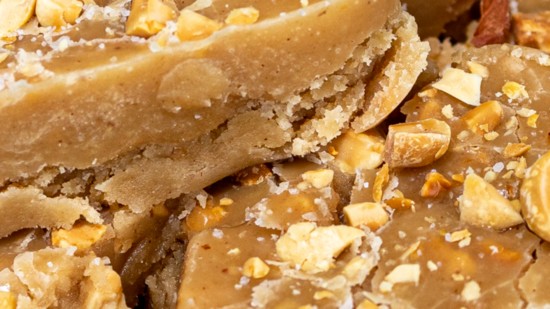 A Tasty Treat Spreads Smiles across the Generations

As the daughter of country music superstar Loretta Lynn, you would think that Peggy Lynn Marchetti’s earliest reminiscences would be filled with songs, cheering fans and constant touring. However, as important as these things were, her favorite memories revolve around growing up in a warm and loving family.

Like families everywhere, the Lynns had quite a bit of family traditions, many revolving around fall and the holiday season. During that time of year, they loved to get together to prepare meals and share some of their favorite recipes. One of those recipes was Loretta Lynn’s peanut butter fudge.

“My mom has always had a sweet tooth and a particular fondness for peanut butter fudge,” Peggy says with a twinkle in her eye. “When I was a little girl, I can remember her getting up in the middle of the night to make a batch of the fudge. Come daybreak, the whole house smelled like peanut butter fudge.”

Over time, Loretta’s fudge prowess spread beyond her family. She began entering state fairs where she routinely won blue ribbons for her gardening, canning and, of course, her peanut butter fudge.

Once, her fudge did more than win ribbons; it actually helped her feed her family.

“Shortly after moving to Nashville, my mom entered a bake sale in Madison where she only brought her peanut butter fudge. At first, people just walked by and didn’t buy any of her fudge. However, she soon got frustrated and started eating the fudge herself. Shoppers could smell the fudge, and they started to ask her about it. She then offered them samples and ended up selling her entire batch,” Peggy says. “Mom was tickled that she had made $130, which was a lot of money back then. It was enough to help buy groceries for a while.”

Years later, after joining the Grand Ole Opry, Loretta continued to make her fudge and share it with her fellow entertainers and crew. They had the joy of experiencing Loretta’s singing on stage and feasting on her fudge behind the scenes.

Today, Loretta’s peanut butter fudge is alive and well and being regularly prepared by three generations of Lynns.

“My mom handed the recipe down to me, and I handed it down to my daughter,” Peggy says. “We all believe that sharing recipes with your family is a wonderful way to create lifelong memories.”

These days, Peggy is continuing the cooking and canning tradition passed down to her from her mom. Along with operating Madison Creek Farms with her husband Mark, she recently launched her own YouTube cooking channel. On this channel, she shares some of her favorite recipes and food preparation tips with her followers.

Peggy is also happy to share her mom’s fudge recipe with our Hendersonville Lifestyle readers. So, grab your ingredients and pans, and let’s make a batch of Miss Loretta’s peanut butter fudge.

1. Mix sugar and milk in a saucepan over medium-high heat. “Mom says you should use a good, thick pan to cook the fudge in,” Peggy says.

3. Let the mixture come to a molten boil for about 10 minutes. Test a sample of the mixture in a cup of ice water. If it sticks together in the water, it is ready. Otherwise, continue to boil.

5. Remove the pan from the heat and stir the mixture until the peanut butter is smooth. “Mom always says work fast."

6. Pour the mixture into an 8-inch-by-8-inch-buttered pan and let it cool. “Make sure to use plenty of butter on the pan. You’ve got to rub it like you love it."