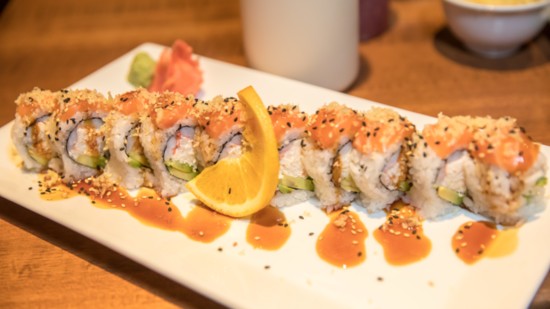 Sushi—to be more specific: good sushi—is one of the most sought-after dishes in cities around the world, and Nashville is no exception. Nama has been a top sushi destination since it opened in Nashville in 2014, with its open, modern space, contemporary decor and savory creations welcoming locals and tourists alike. Both area locations offer a pleasantly diverse menu and cool vibe, making Nama a staple sushi stop.

The appetizers alone are worth the visit. A clear standout, the shellfish ceviche is incredibly fresh and a real treat. Mixed with pico de gallo, avocado, cilantro crema, scallion, sriracha and lime, Nama references South American cuisine with this light and flavorful dish. Crispy Crab Bites take the traditional idea of a comforting, delicate crab cake to a playful new level one just has to bite into to understand. For the more traditional diners, vegetable spring rolls with soy glaze and sweet and sour sauce are a tender, crisp and savory hit to palates.

When it comes to sushi, everyone has their preference—from preparations of sashimi or nigiri to smoked fish, cone-shaped hand rolls to signature cylindrical rolls sliced into six or eight pieces. Perhaps the most debated preference comes from those devoted to raw fish versus the tempura-fried fanatics. So, which is best? Though Nama offers something for everyone on its menu, Brentwood Lifestyle thought it'd be fun to taste a few house favorites side-by-side for comparison in an attempt to answer that question.

A group of Brentwood community members served as secret judges for a sushi showdown.

Popular rolls from Nama were placed head-to-head in a creative culinary battle. The setting served as the perfect vessel to mingle and discuss food with other local professionals who may or may not have visited Nama before.

“This is a really fun event to meet people in a cool setting,” said Megan Reed, local creator and graphic designer. “I mean, everybody loves sushi!”

Bert Simmons, organizer of The Jacksonville Tattoo Convention, said the atmosphere was a real highlight.

“The intimacy [of the event] was the best part—how close it was, and how everyone could talk and interact.”

Adding to the excitement, the gracious chefs of Nama were front and center, showing guests step-by-step how to create the rolls up for judging. Their talent for the craft of rolling sushi was evident with every deft maneuver of their bamboo mats, and they threw in some impressive extra knife skills by demonstrating how to thinly slice avocados with daring speed for the artistic (and delicious) topping of the Secret Garden Roll. Each person tasted all the rolls and voted for their favorite on an anonymous card to crown the winning flavor combination.

“I thought everything was great. It was fresh—the vegetables were fresh, the fish was really fresh.”

“The appetizers were a pleasant surprise. I don’t come to any sushi place for appetizers; we come for the sushi. But they were delicious—large portions and super fresh.”

“My favorite was the Bombshell. It was awesome—very clean and light. Tasty.”

“I really liked the tempura. What stuck out to me was that you could taste the different flavors in the tempura. It wasn’t heavy.”

Understandably, the Bombshell reigned victorious! This roll has a little something for everyone: tempura-fried shrimp on the inside for the perfect amount of decadent crunch, cool avocado for balance, roasted red pepper for a complementary yet unique twist, topped with clean raw crab and drizzled with fantasy sauce for a touch of richness and chili sauce for a little sweet heat. The Bombshell offers this question to the fried-versus-raw-sushi debate: Why choose when you can have both?