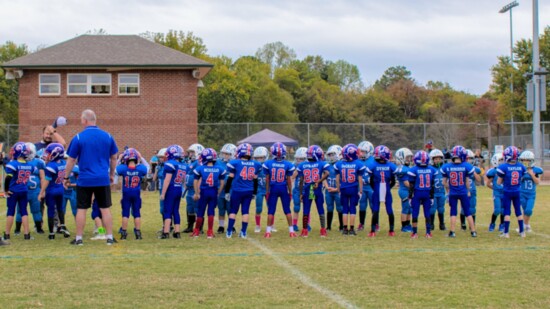 For 29 years, the Brentwood Blaze youth football and cheer program has allowed thousands of Middle Tennessee youth to develop life-long skills. Obviously, not every participant will play and cheer for an NFL team, yet boys and girls from ages 5 to 12 learn firsthand the benefits of teamwork and sportsmanship.

As a Tennessee Youth Sports Alliance member, Brentwood Blaze teams compete against area teams from similar programs in a fun and safe environment. For those who think football and cheer basics are all that’s taught in this program, they're in for a surprise.

Brentwood businessman Don Borgeson has two boys who participate in the program, and he’s also a board member and coach. Although he and his family are excited about the upcoming season, they believe the program's benefits extend far beyond the football field.

“This is my fourth year to be involved with the Brentwood Blaze program. My coaching philosophy is more about skills than drills. Each of our coaches focuses on teaching fundamentals that make playing fun and safe. Watching the kids develop skills that will last them a lifetime is fulfilling for everyone," Coach Don says.

The 2021 Brentwood Blaze season for football and cheer teams begins on Aug. 28, with an initial training camp held July 26-29. Player and cheer evaluations take place the first week in August. Bowl games are on Aug. 14, followed by a jamboree on Aug. 21.

Depending on the number of participants, the Blaze program will have 20-30 football teams, with about 20 kids on each team. The cheer program will probably have fewer squads, yet they will cheer for all teams during the season.

Don wants parents of Blaze participants to know safety is the No. 1 priority when it comes to both football and cheer programs.

“I hope the conversation about participating in the Blaze program starts at the kitchen table,” he stresses. "I hear from many parents that their child wants to play football, but one or both parents are concerned about safety. Believe me, I understand. That’s why we’ve invested in NFL rated helmets for maximum protection. Plus, our coaches constantly stress techniques that minimize injuries.”

Another strategy designed to maximize safety is how coaches evaluate players. Football teams are divided by age and weight, ranging from the 5- and 6-year-old Pee Wee to the 11- and 12-year-old Varsity division.

For example, football players in the 9-10 division are divided into three groups based on skill level with weight ranges between 95 and 115 pounds. Any player exceeding the limit is not allowed to advance or run the ball.

Don encourages parents of participating boys and girls to enroll their children in the July training camp. “When kids participate in the camp, coaches can get a better feel for their athletic and skill level. We work hard to make sure players aren’t matched against players that are bigger and stronger. That’s one way we help minimize injuries, plus, it makes for more competitive games.”

The Blaze season kicks off with a four-day, non-contact camp for football and cheer held July 26-29 at Crockett Park Fields from 5:30-8 p.m. The cost for the camp is $125 each.

The cost to participate in the regular season football program is $275 per player. Included are a uniform and practice jersey, shoulder pads, helmet and game pants. Football players need to provide their own cleats, mouthpiece and practice pants.

For the cheer program, the regular season costs $225 each, which includes a uniform and poms. Each cheerleader must provide their own shoes, leggings and long sleeve undershirts for when cooler fall temps arrive.

Sherri Baker is the Brentwood Blaze cheer director. Even though the former Virginia Tech Hokies cheerleader no longer has a daughter in the program, she says she still gets enthused each summer as the gridiron season draws near.

“I cheered from age four all the way through college,” says director Sherri. “The Blaze cheer program gives girls that aren’t on competitive cheer teams the opportunity to learn about sideline cheer. They learn all the cheer basics and also have tons of fun. More importantly, I want our cheer girls to radiate confidence and learn to be a cheerleader in every aspect of their lives.”

Besides Sherri, several cheer coaches are returning, including others with college cheer experience.

Both football and cheer coaches are thrilled about the upcoming season. Outside of a love for their respective sports, sometimes coaches see the results of their efforts in later years.

“One of our assistant coaches ran into a former player at the mall last year. When he played, this kid was hard to reel in at times, and we initially had difficulty coaching him. Today, he’s a different person. The coach was impressed with the young man’s disposition, how polite he was, and overall how he handled himself. We believe part of his maturity came from what he learned in our program. That makes everything we do worthwhile.”

To inquire or sign up for Brentwood Blaze football and cheer programs, visit the organization's website at BrentwoodBlaze.org.