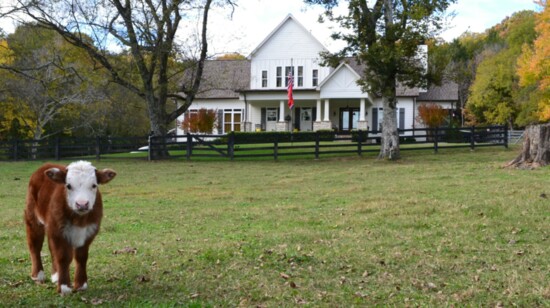 Anyone who has headed South on Franklin Road after crossing Moore’s Lane has probably had the same reaction and question passing the three-acre Buck and Bull Cattle Ranch; how do they have such a fantastic house and cattle this close to the city and can I stop and pet them? The house is zoned for the county, so large animals are allowed and the second answer is a simple yes!

In 1995, owners John and Teresa Ginn moved to Franklin after John, project engineer for Fed Ex was transferred from Memphis. One of the main reasons they chose Williamson County was for its terrific schools. Their son, Jason, a mechanical engineer, attended Williamson County schools K-12. He is now working on the MARS mission with the Jet Propulsion Lab and contracted to NASA.

The Ginn’s bought the property in 2015 and have lovingly transformed it with an amount of hard work that is nothing short of super- human. Its name, Buck and Bull Cattle Ranch, sounded strong and with the house, barn, soon-to-be man cave and shed, adding “ranch” which means multiple buildings on one piece of land, was obvious. The original house was built in 1956 and was partially demolished when they purchased the property. John completed the demolition himself with a skid steer and seven 40-yard dumpsters. Their new house had to remain on the exact same footprint but beyond that the Ginn’s designed an open concept, allowing sunlight to flood in, bringing the outdoors inside. They selected builder Trey Vaughn to bring their vision to life.

Once you walk in the front door of the craftsman style farmhouse, you are met with warmth, luxury and the overwhelming thought put into the space to make it not only beautiful but functional and easy. The open shelf concept on the kitchen not only helped save money, but is a nod to past farmhouse trends showing themselves in modern homes. Not a boring cookie-cutter kitchen, the white marble countertops are a standout; until you see the apron sink, unlike most, this one has beautiful texture on the front and holds its own. The living room is warm and open with a detailed trey ceiling. The stone used on the fireplace hearth was excavated from the property. To the left of the fireplace there is a
door way to a covered porch sat in the side pasture; meaning Chet, Prissy or Biscuit, the Ginn’s Miniature Herefords, could easily mosey up to the porch for a visit.

The décor is as much a part of the house’s character as the ten-foot ceilings and space saving barn doors have become. John enjoys going to auctions and its visible by the conversation-evoking pieces placed throughout the house. There are vintage radios, phones and sentimental touches incorporated throughout; old horse shoes found on the property hang in the kitchen. Upstairs is beautiful master suite full of natural light. With the large four poster bed, luxurious textured carpet, gorgeous chandelier lighting and media area with a couch. A large walk-in closet is adjoined to the master by an interior sitting room. The cherry in this master suite sits in the bathroom on four, chrome, claw feet. Teresa and John rehabbed the clawfoot tub themselves. There are two additional bedrooms in the house along with 2 more full baths.

The fencing around the Ginn’s house is nothing short of jaw-dropping when you realize that John and his father dug and set every post hole for the many fences. They got so efficient that John’s father once timed him; he could dig a hole in a minute and a half using a skid steer with an auger attachment. Most people, and John with a fond smile, will agree there is “a lot of sweat equity” at Bull and Buck Cattle Ranch. John and his dad, Ray Ginn, built the gray barn and the pole barn on the property, every stud,
joist, and rafter.

The outside of the house has just as many meaningful touches. The porch was a must and the Ginn’s used every square inch they were approved to build. The flag pole standing between the house and front pasture has not been moved since it was placed in its location in conjunction with the original home. The Ginns line the fence with flags each holiday to honor those who served. At Christmastime, you will notice a wreath on each window, however, what most people notice are the blue snowflakes hanging from the trees. During college, John was a guard at Graceland and the blue lights are a nod to Elvis.

As much an attraction as the house, you will find the Ginn’s beef cattle: Chet, Prissy and their calf, Biscuit, grazing about. Chet, the Ginn’s bull, was the first of the cattle to call Buck and Bull Cattle Ranch home and was sired by a grand champion out of Denver. Weighing in at around a ton, he’s incredibly friendly and will eat directly out of your hand. The Ginn’s get all their hay and feed locally at the Williamson County Co-Op. All of the Ginn cattle are registered with the American Hereford Association. A naturally docile animal they are “trainable” and can learn. Much of their knowledge is gathered by smell and their two methods of gathering odor through their nose and the roof of their mouth by the
Jacobson’s Organ.

The Ginn’s will be sending Biscuit to his new middle Tennessee home in April. He will go to another home like his home at Buck and Bull, to be cared for as a pet, like the Ginn’s previous calves. The calves are born at a higher percentage of their adult weight than other breeds, making them more economical. A newborn weighs in at 35-60 pounds. While there may be a few months without a little one visible, have no fear, come fall Prissy will hopefully have another addition to Buck and Bull Cattle Ranch along with another reason for locals to love driving past.

Teresa, who photographed the ranch for this story in conjunction with her photography hobby, is an office manager with the federal government. John is retired and enjoys outdoor projects at the ranch. You can learn more about the cows and their care at BuckandBullCattleRanch.com