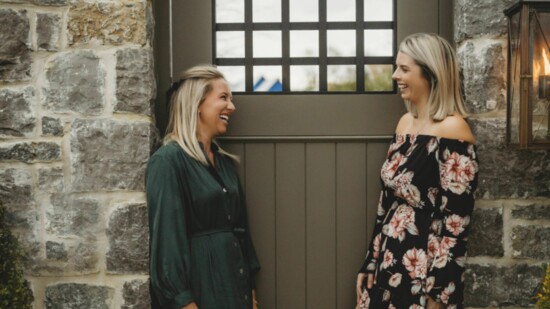 The Female Perspective on Homebuilding

The custom home business is booming right now in middle Tennessee and there are some wonderful women at the helm making these homes the best of what customers can ever ask for. Two of those women are McClain Franks of Tennessee Valley Homes and Lauren Spangler of Hidden Valley Homes.

Having both attended high school in Williamson County, they are no strangers to the area and the wants and needs of clients that are specific to the region. Both agree that being a female on the management team is a win for the client. As a woman, McClain believes that an added depth of how a house can efficiently function is added to the planning process. Additional personal touches like colors, trim and requests of the clients can be further realized while a woman is at the table. On a larger scope, they focus on the placement of rooms and daily functionalities that often feel like an afterthought, such as the location of the laundry room. Lauren firmly believes that the female perspective adds a lot of value and a livability to a custom home.

The one thing that is clear is that McClain and Lauren both have a great deal of humor and positivity in what can at times be challenging situations. McClain explains that it’s often their job to get everyone on the same page while ensuring the tasks are completed within the challenging parameters this exploding climate brings along with it. She warmly refers to it as “wrangling.”

While becoming more common in the home building arena, women are not the majority. A potentially daunting thought, both Lauren and McClain don’t view it that way. They both call on their local resources and networks they have actively developed; sourcing for the expert and extra eyes and ears to make sure their customers are not only happy, but ecstatic. Both agree success is how they feel about their career more than it is about any other measure. For Lauren, her feeling of success was after the initial learning curve, when she was confident not only in herself but in what she provided for the customers. For McClain, it’s that “it’s never the same job,” and that she is learning something new every day, being kept on her toes.

Being in the same industry they share a common goal and Lauren is clear that it’s to go after it and excel. When all standards are kept high, it keeps expectations high, which is good for the homeowners and creates a continuity in the community that is important. With enough business to go around in this flourishing climate, McClain is quick to point out that one good builder succeeding only bolsters the rest of the building community.