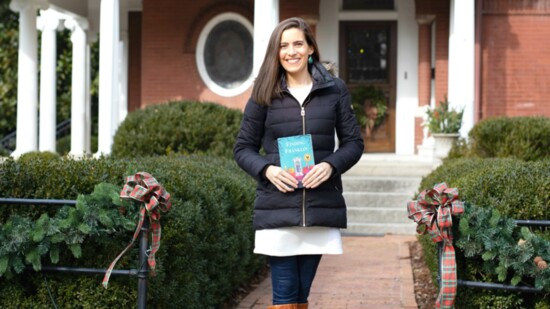 Historic Franklin, Tennessee is the inspiration behind Katie Shands’ novel, Finding Franklin. Her book won the Janice Keck Literary Award and a brand new set of devoted fans of Katie and her beloved Franklin.

Katie explains, “I had countless novels saved on my computer, but I had never finished one. When my family and I moved to Franklin in 2015, the town inspired me to begin a new novel. The historic downtown and houses hold so many stories, and Franklin made my imagination come alive!”

The book took Katie a year to complete. It’s a faith-based story about a woman named Charlotte who was abandoned as an infant on a doorstep in Franklin. Haunted by unanswered questions and an unrelenting desire for roots, she purchases a dilapidated Victorian home near historic downtown and sets out to solve the mystery of her birth. “When I finished the the novel, I learned about the Janice Keck Literary Awards, offered through the Williamson County Public Library. The award had a fiction division, and the prize was a complete publishing package. So I buckled down, edited the first draft myself, and then sent it off to an editor before submitting it to the contest.”

Katie’s manuscript ended up winning and was published under the library’s imprint, Academy Park Press. “The reception has been fantastic, especially since it’s set in Franklin, and everyone loves Franklin!” It has created even more interest in the historic homes of our charming city.

“My all-time favorite historic house in downtown Franklin is the Watson House on 3rd Avenue South. The mansard roof practically drips with drama, and it captures my imagination every time I pass it. The house was designed by Hugh Cathcart Thompson. He is the same architect who designed the Ryman. I also love all the houses on West Main. Throughout my novel, one of the main characters is restoring a house on West Main, and I based it on the Green-Moore house, though I did take a few artistic liberties in my descriptions. The wrap-around porch and turret room are my favorite parts of this house, plus it has a scandalous past. An interesting story always scores extra points in my book.”

Katie’s first foray into journalism was in high school when she wrote for the school newspaper. After graduation, she went on to study Journalism and Electronic Media at the University of Tennessee, Knoxville. She wrote for the university’s paper The Daily Beacon.

“During my senior year, I landed an internship at WBIR, Knoxville’s top-rated broadcast news station. After a few months, I was hired as a media tech, responsible for editing video, writing for the website, and various other technical jobs. Eventually I was promoted to producer where I put together the weekend newscasts, the 10 and 11 p.m. weeknight newscasts, and Newsmakers, a weekly political show. I chose, assigned, and organized the stories, wrote the scripts, built graphics, and timed the show. I was the person talking to the anchors in their earpieces.”

A career in broadcast news requires crazy hours, without breaks for holidays or severe weather. During times of ice storms, blizzards, or tornadoes, her job called for all hands on deck to cover the story. So when Katie and her husband, Daniel, decided to start a family, they made the decision that Katie would stay home to raise their children. They now have four young children all under the age of nine.

“Writing became a hobby for me, and I began to blog and dabble in fiction. I love writing purely for the sake of writing. It’s a form of therapy for me, an escape from the humdrum of daily life. Writing allows me to dream, to travel anywhere, to be anyone, to do anything. It gives me something to think about while I’m stuck in traffic, doing chores, etc. I map out stories, build characters, brainstorm plot twists, create new worlds. It’s great fun! “My blog “Faithfully Organized” began as a hobby, an excuse to write about my other favorite hobby: organizing! Tidiness has always come naturally to me, and my friends and family often ask me for tips. Since I enjoy it so much, I decided to start an organizing/cleaning blog."

In addition to organizing, Katie loves history and historic preservation is one of the things she loves about Franklin. Thanks to groups like The Heritage Foundation and men like Robert Hicks and Rick Warwick, preservation is valued here. “Far too often, homes of historic significance are torn down in the name of progress. Brick by brick, our country’s history is being lost to the bulldozer. The mindset in Franklin is different, and the results speak for themselves.”

Her family’s favorite place to visit is Franklin’s historic downtown district. "During the summer, we love to get ice cream at Sweet Cee Cee’s and listen to live music in the square. My kids love to explore the Williamson County Museum in the Archives Building and play in the fountain across the street. As a family, we attend the annual festivals and monthly art crawls and catch movies at The Franklin Theatre. Often, we will take evening walks through the neighborhoods, admiring the historic homes. It truly is a magical place with an endless list of things to do.”

Katie is currently working on her second novel about Franklin. It’s based on the area in the 1950s. She titled it, A Song in the Night and hopes to have it ready for editing by her friend and fellow writer Chris Rosland next summer.

We asked Katie to describe her adopted hometown, Franklin, in one word. She said, “one-of-a-kind!”

Katie's book is available for purchase on her website KatieShands.com, Amazon, BarnesandNoble.com, Landmark Booksellers, Handy Hardware (both in downtown Franklin), and Parnassus (in Green Hills).