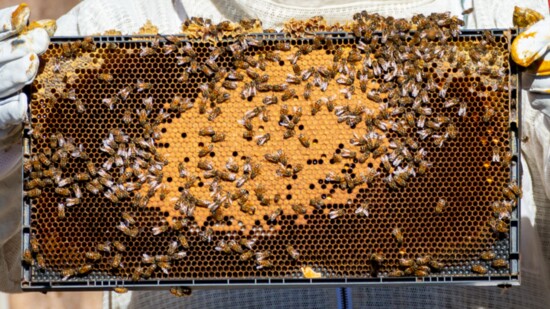 Getting Your Buzz On, Naturally

Local Jeweler Helps Save The Environment Through Beekeeping

In 2006, apiarists, also known as beekeepers, began losing their bees at an alarming rate. This decline continued throughout the next decade, resulting in a cumulative loss of more than 10 million hives by 2015.

According to the U.S. Department of Agriculture, most of these losses were attributable to a phenomenon known as Colony Collapse Disorder (CCD), in which a majority of adult worker bees suddenly abandon their colony, leaving the queen bee behind to fend for herself. In most cases, this situation results in the total collapse of the hive.

Researchers eventually determined that CCD is caused by several factors, including agricultural chemicals, disease, environmental stress and parasites, such as tracheal and Varroa mites. Over time, they developed several approaches to dealing with the condition that have greatly reduced the incidence of CCD. However, despite progress, the overall health of bee colonies remains fragile.

The plight of bees is all too familiar to apiarists across the country, including local beekeeper John Hancock, owner of Hancock Jewelers in Goodlettsville.

“Despite the best efforts of scientists and beekeepers, bees will continue to be endangered as long as they remain vulnerable to pests such as the Varroa mites,” says James. “We need more effective ways to protect our bees from pestilence.”

John’s interest in beekeeping began at an early age from watching his father manage numerous bee colonies in the 1970s and 1980s.

“My dad raised bees, and he made the beekeeping process look both fun and easy,” says John.

About 8 years ago, John finally decided to take the apiary plunge himself, and he began investigating what would be required to establish his own bee colonies.

“I did a lot of self-study on beekeeping, including reading articles and watching YouTube videos,” says John. “I also received a great deal of help from local bee clubs, particularly the Allen County Beekeepers Association, located in Scottsville, KY.”

After a few months had passed, John was finally ready to begin beekeeping in earnest.

“Early on, I learned that one of the quickest ways to get into beekeeping is to go to a specialty supply house, such as Johnson’s Honey Farm in Goodlettsville,” says John. “They can provide everything a prospective beekeeper needs, from housing to supplies to the bees themselves.”

At first, John started out small, with a colony of bees purchased from Johnson’s, supplemented by a self-caught wild swarm. However, his bee farm grew considerably over the succeeding years.

“Today, I usually average 50 colonies each fall, with each colony averaging 40,000 to 80,000 bees,” says John. “This number will typically drop down to 40 colonies or so by springtime due to normal winter losses.”

All of John’s bees are honeybees, consisting of several different kinds.

“I typically have three major species in my hives – Italian, Buckfast and Carniolan bees,” says John. “I also keep several colonies of local ‘mutt’ bees, which are hybrids that result from crossbreeding of different species. Unlike pure species, the mutts tend to have better disease resistance.”

Although most apiarists make beekeeping appear simple, it is actually a complex process that requires a great deal of discipline and regular work in order to maintain the health of the colonies.

“Keeping colonies healthy and thriving requires commitment,” says John. “I regularly feed the bees, treat them for mites and monitor them for signs of disease.”

When he began his apiary journey, John had only intended to raise bees as a hobby. However, he eventually decided to treat beekeeping as another small business.

“While beekeeping is still a side interest, I also gather, package and sell the honey that the bees produce,” says James. “I sell the packaged honey, branded as Hancock Honey Bees, to local customers each season until my supply runs out.”

All in all, John has found beekeeping to be enjoyable. However, he has also learned that it can be a humbling endeavor.

“Successful beekeeping requires constant study,” says John. “I will never learn enough about beekeeping to be smarter than the bees.”