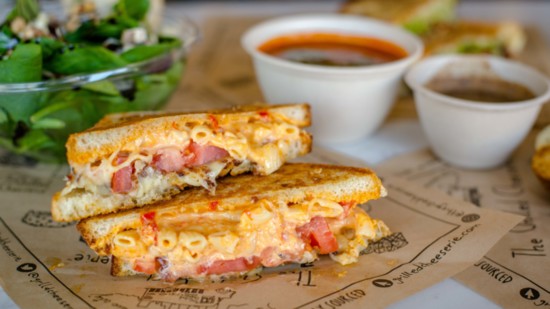 Made South started as a subscription box business back in 2014. Chris says, "We would pull together 3-4 items we loved that were made by makers around the South and send them to our subscribers all over the country. Pretty quickly people started pitching us the idea of hosting an event that would bring all of these wonderful makers together. My wife and I love feeding people at our house, so we knew that food and drink had to be worked in there somewhere. We decided to throw a big shindig and call it Made South Market and a couple thousand folks showed up.”

Chris and his wife are no strangers to the south, as both were born in Nashville, and grew up on the north side of Nashville in Greenbrier. They moved to Franklin in 2003 and never looked back.

Chris adds, “I feel like a big section of the country looks at the South as a placed filled with dumb, racist rednecks. We certainly have our problems and have committed sins as a region, and I don't run away from that, but I feel called to shine a light on the people who are doing good things here. The Southerners I know are kind and gracious and smart and creative and warm and welcoming, and they are making amazing things.”

Clearly, he’s on to something. This year Chris and company hosted their eighth different MADE SOUTH Market event, including The Southern Whiskey Society coming up later this month at the Factory.

And if that isn’t enough, Chris has a podcast called Southerner. He reveals, “One of my favorite experiences is to sit down with someone I find interesting, whether that's a chef or an author or a maker or a musician, and have a conversation with them about things I'm curious about.”

Christian has been doing videography now for close to five years. He says, "I was introduced into videography during my junior year of high school when I took a video editing job at a local skydiving company. After several months of working on the editing side, I wanted to get into the actual video side. My dad bought me my first camera and I spent the majority of my time behind it. I filmed and photographed everything from flowers and nature, to travels and hobbies.”

It’s his passion for videography that sets him apart from other wedding videographers. Christian adds, “I believe in the couple's unique love story. I do a Discovery Session with all my couples and get to know them, how they met, their hobbies, values, the proposal story, when they knew the other was the one, etc. I do all this in an effort to go into their wedding day with the mindset of "Ok, I know their story and what's important to them. How can I film this to show that?" I'm incorporating my style into it too, focusing on shadows and the depth/detail they create in a moment.”

He continues, “I have started using raw moments from before the wedding day. I love to create a balance between my beautiful and cinematic shots with using shaky and raw moments (when applicable) such as home videos from the couple's childhood, Instagram stories from important times in their lives, old photos, etc. All these moments deserve to be captured in the film.”

But Christian isn’t always behind a computer. “A large part of my life recently has been rock climbing and hiking. It's nice to take a few hours to get away and go climb or just get into nature and away from all the technology for a bit.”

Joseph may have been in the music industry most of his life but when he met Crystal in 2004, he knew life was going to change. He was at a crossroads with his music and Crystal had gone to culinary school and even started her own restaurant when she was just 19, so it was almost a no-brainer that together they would end up in the restaurant business. They relocated from Los Angeles in 2009 and the rest was history.

"Nashville is such a great entrepreneurial city," Joseph says, "so we felt like we had a little bit of a competitive advantage with the experience we had in LA. We both had people we knew in the culinary and restaurant industry, specifically food trucks. Once we thought of the food truck idea, we were all in."

Joseph adds, "Bread and cheese is kinda like a blank canvas. You can do anything with it. And you can feed the whole family."

The move to brick and mortar stores was not an easy decision. The truck was wildly successful. Joseph states, "We loved the food truck scene, being part of the community, going from one neighborhood to another."

Today The Grilled Cheeserie operates three locations in Hillsboro Village, East Nashville and of course, Main Street in Franklin, and their main products, bread and cheese, are sourced locally from farms in Tennessee. The truck still rolls around so be sure to check the website for their daily location.

Tom Brown is a longtime host of Elvis events around the country, including Graceland's Elvis Week and the Tupelo Elvis Festival. The former Vice President of Original Production for Turner Classic Movies spent a lot of time on projects involving Priscilla Presley, Elvis' band members, friends, family and co-stars. So he knows his Elvis stuff.

As the host (and co-producer) of the Nashville Elvis Festival, Tom says "'The King' still burns bright 42 years after his passing. Elvis' music has influenced generations of artists and is still relevant today." Keith Urban, Post Malone and Shawn Mendes have given nods to the coolness of “The King.”

This year's festival will be held at the Jamison Theatre at the Factory. Fans from around world will enjoy live music performances from some of the world’s best Elvis tribute artists, from young 50s breakthroughs, to ’68 comebacks in black leathers to Las Vegas showman.

The festival is also one of the world’s licensed preliminary rounds of the Ultimate Elvis Tribute Artist Contest with the winner advancing to Graceland’s semifinal during Elvis Week in August. Competitors are from both near and far, including Ireland, Norway, Canada and Chile. Judges are people who know the music or knew Elvis personally.

Brown’s enthusiasm is contagious, wanting new audiences to discover that Elvis was more than just rock n roll. He was also country, blues, and gospel.

Tom loves hosting the festival in Franklin and says, "Come on over." He even recommends,“Elvis Through the Years” on Sunday, March 22nd at 2:00 PM. Tickets are available at NashvilleElvisFestival.com. Go get yours before Elvis has left the building.