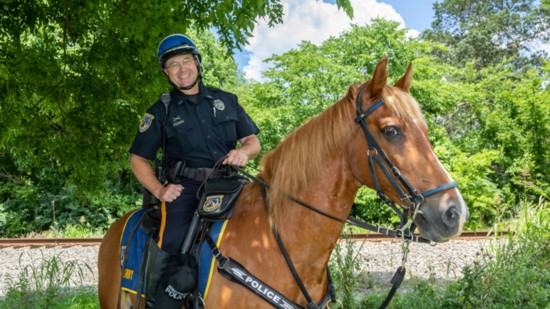 Pet Partners That Serve and Protect

Serving the Community, Four Legs at a Time

Sometimes, the bond between human and animal transcends the traditional owner-pet relationship. In these cases, animals become much more than pets; they become professional partners.

Let’s take a look at a couple of cases in which local law enforcement officers and their service animals work together as partners on patrol.

From the Streets of Indian Lake to the greenways of Drakes Creek Park, the Hendersonville Police Department Mounted Patrol is a common sight. The officers and their equine partners routinely patrol Hendersonville Parks, shopping centers and special events, enforcing the law and bringing peace of mind to shopkeepers and citizens.

“People come up to pet our horses, and they always have smiles on their faces,” says Officer Jeff Duren, an 8-year veteran of the mounted patrol. “Our patrols help build a wonderful rapport with the community.”

The mounted patrol originated in Hendersonville in 2008 as the brainchild of Assistant Police Chief Jim Jones, who is a lifelong horse lover.

“Having a mounted patrol is like a dream come true for me and my officers who are part of it,” Assistant Chief Jones says. “We have the opportunity to perform serious police work on horseback while at the same time serve as ambassadors for the police department.”

Currently, the mounted force consists of two full-time and two part-time officers and a team of four horses. Patrols are usually limited to teams of two officers and their horses due to manpower constraints.

Like Officer Duren, his partner, Sunny, is also an 8-year veteran of the force. He is a Tennessee Walking Horse, as are all of the horses in the mounted patrol.

“Walking Horses are very intelligent, and they have better temperaments,” Officer Duren says. “We look for calm horses who are good around people, especially children.”

Finding suitable horses can be a challenge, and the mounted patrol officers often have to evaluate up to 100 candidates before they can find one that will work. After a horse has been selected, the training process begins and can take up to six months. After the training is complete, the teams begin normal patrols.

For the past several years, the mounted patrol has been based out of a horse barn at Trinity City. However, this summer, the patrol will be moving to an all-new building at Volunteer Park at Arrowhead.

Beginning this summer, the Sumner County Sheriff’s Department is activating a new K-9 division that pairs deputies and highly trained dogs as patrol partners. While the team will be specially trained in drug interdiction, it will also be involved in normal patrols across Sumner County.

“We are excited about our new K-9 division and the opportunities it will provide,” says Sumner County Sheriff Sonny Weatherford. “This team will give us a new skill set that will let us provide needed services to our community without having to solicit help from other departments.”

Initially, the K-9 division will entail a single team consisting of veteran Deputy Brian Gambino and his German shepherd partner, Jax. Deputy Gambino was chosen in March 2019 by a three-person selection committee consisting of veteran dog handlers, including Sheriff Weatherford, who had been part of a K-9 team back in the late '80s and early '90s.

“We had several quality candidates for the position, but we wanted to make certain that we selected the right one to start up the program,” Sheriff Weatherford says. “After reviewing all applicants, the committee unanimously selected Deputy Gambino.”

Jax, an 18-month-old Netherlands native, was purchased by the Sumner County Anti-Drug Coalition and donated to the Sheriff’s Department. He received his name as the result of a department-wide contest.

“We had a lot of fun with the contest, and we received over four pages of potential names,” Sheriff Weatherford says. “However, in the end, we let Deputy Gambino make the final selection.”

Although Jax was received as a donation, the department still had to spend thousands of dollars on patrol vehicle modifications, a custom kennel and an intense officer-dog training program.

“It takes 10 weeks of training to get us ready to patrol together as a team,” Deputy Gambino says. “We are trained in multiple areas, including tracking, suspect apprehension and drug detection.”

Once the training is complete, the K-9 duo is ready to begin patrolling across the county. Along with routine patrols, Deputy Gambino and Jax are also available for special community events.

“I would love to have another service dog this fall,” Sheriff Weatherford says. “I hope to budget for additional units in the coming years.”

However, until then, Deputy Gambino and Jax will patrol the streets alone.