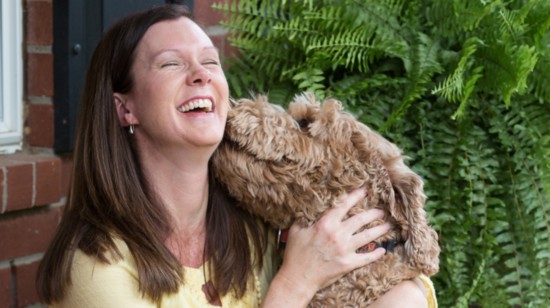 Meet Jen Sigler, a second-grade teacher at Hunter's Bend Elementary, and her dog, Ginger, a 5-year-old goldendoodle. Ginger was adopted from a breeder near Hopkinsville, Kentucky, and has been with the family since 2013.

Ginger has always been very mischievous. We still can’t even trust her to go upstairs where our bedrooms are because she is determined to go straight for socks or stuffed animals. To this day, a bad habit of hers is that she still jumps up to pull down the placemats off the kitchen table and runs off to chew on them. I used to think it was an attention-seeking behavior, but I now think she just wants to drive me crazy.

Ginger doesn’t really have a favorite game. She will sometimes fetch the tennis ball, but after a few times, she is bored with that and ready to lay down. She would rather be petted all day long than play fetch. She does sit and shake her paw on command really well. That’s one trick she’s very good at doing.

What's the hardest thing about being a pet owner?

The hardest thing is remembering to “Ginger-proof” the house before we leave for any period of time. We can’t leave out shoes, food or remote controls because they will be destroyed while we are gone. We also have to remember to shut the bathroom door so she doesn’t toilet paper the house. We still have to use baby gates to keep her from roaming upstairs and getting into trouble.

My best memory involving Ginger is when we brought her home for the first time and she fell asleep with her head hanging over her water bowl. I thought she was going to be an easy dog to live with. That hasn’t really come to fruition, though she has mellowed with age. I’ll never forget when our neighbor called to tell me that there was a honey ham that had been delivered to our front door for the holidays and Ginger decided to help herself. She tore open the box, ripped off the Styrofoam lid and proceeded to eat through the plastic bag and foil before eating half of the ham. I really wish I could have seen that in action!

Meet Gabrielle Iglesias, a Spanish teacher at Grassland Middle School, and Mo, her 5-year-old black-and-white long-hair cat. Mo, which is short for Moriarty (like the character from Sherlock), was a gift from Gabrielle's sister for receiving her master's degree in teaching in 2013. Mo is from the adoption center at PetSmart.

Mo is a very curious cat. His worst habit is knocking over cups on purpose. If I leave a cup of water out, he will drink out of it then stick his paw in it and spill it.

Mo can actually fetch! His favorite toy to fetch is a pipe cleaner or a twist tie. I will wind it into a spring and throw it, and he will chase after it and bring it back to me. We play this game every morning.

What is the hardest thing about being a pet owner?

The hardest thing for me is leaving him. Whether I'm going to work or going out of town, I hate being away from him and not knowing what he is doing. I am a total helicopter cat mom.

Mo always runs up and greets me at the door when I get home. I have also trained Mo to give a high five. He is such a cuddly cat who loves to give me kisses—yes, he does actually kiss me.

Meet Dwayne and Marla Hastings, a fifth-grade teacher and a special education assistant at Walnut Grove Elementary and swim coaches for the Cottonwood Pirates. Their dog Tucker is a 6-year-old mixed breed who was the oldest of an unplanned pregnancy of their former dog, Brussels Griffon. Their dog Winnie is a 2-year-old miniature schnauzer who joined the Hastings family after her first family was not particularly appreciative of her excessive energy.

Tucker is a kind and respectful dog. He really doesn’t have any bad habits. He is so laid-back that trouble never finds him. Winnie, on the other hand, has her share of somewhat less-than-desirable habits. Given her propensity to always be on high alert for perceived dangers to her family, she stations herself in a chair by a large window that overlooks our patio. This provides her excellent sightlines into the background to notify the family of squirrels, chipmunks and bunnies that intrude on our property. As a schnauzer, her warning is sharp, loud and persistent—even as we attempt to assure her that all is well. As a very social dog, she also has a bad habit of conveying her displeasure of being left alone—even when Tucker is around—by chewing on items that are left within her reach when we are out of the house.

Before Winnie joined the family, Tucker would retrieve a tennis ball or other dog toy that was tossed. But now Winnie’s protestations have turned Tuck into a relaxed observer of Winnie’s games with the family. When Tucker tries to play or get our attention, Winnie lightly clamps her mouth over one of his rear legs to kindly remind him that she is now top dog. Winnie is big on playing. Her favorite activity is having someone chase her while she grasps the ball or toy in her mouth. She is not a fan of toss-and-retrieve activities; she does enjoy a vigorous game of keep-away.

What is the hardest thing about being a pet owner?

Likely, the hardest thing about being a pet owner is leaving Tucker and Winnie at home alone while we are away from the house. We are grateful they have each other, so to speak. And while Tucker doesn’t seem to be bothered if Winnie isn’t around, Winnie is perturbed when Tucker is away or in his crate because of some minor offense, like slipping out of the front door and finding something odorous in someone’s lawn to roll in.

Our best memory of Winnie is the fact that every evening, almost always around 9 o'clock, she snuggles in beside us, whether we are watching television or reading. It is as if she knows it is her bedtime. Perhaps our best memory of a pet is one we no longer have but have memorialized in Winnie’s name is of Winston. He was the offspring of miniature schnauzer and Brussels Griffon who was with us for 12 years. We have never had a dog that had such a delightful and winsome personality. He was well-loved by all and is missed by us to this day. And when we stop to think about it, the conflation of Winnie and Tucker’s personality is very near to what we fondly remember of Winston.