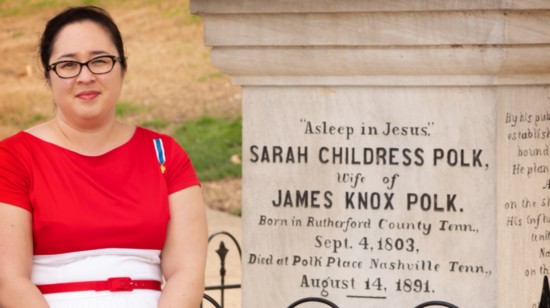 Throughout Aubrey Williams' deployment, she and more than 400 soldiers received thoughtful care packages and letters from Daughters of the American Revolution (DAR) members. After her five years in the Army, she accepted a job in Franklin and decided to join the volunteer organization that helped her through her military service. Now the Tennessee State Chairman of the DAR Service for Veterans and 1st Vice Regent of Brentwood’s Sarah Polk Chapter, Aubrey shares the extent of DAR’s influence on military members.

“The depth of the impact these women in the DAR have on our country is one of those quiet things we don’t often hear about,” Aubrey says.

The DAR has three goals: historic preservation, education and patriotism. Patriotism is the major reason Aubrey wanted to get involved in DAR. When Aubrey’s college professor, a DAR member, learned of Aubrey’s deployment, she gave Aubrey’s address to the DAR’s Project Patriot committee. Project Patriot sends care packages, expired coupons for the commissary and bedding for returning soldiers. Because the professor knew Aubrey has access to a large mailroom, the committee was able to send packages to hundreds of soldiers. The packages include things like healthy snacks for their cargo pockets, Q-tips for both hygiene and weapon cleaning and brand-name sunscreens. Women would feel more at home with the personal letters, women’s magazines, nail polish and lip gloss they include as fun surprises. The DAR listens to recommendations and keeps an updated list of supplies members can send overseas on its website. The Sarah Polk Chapter focuses on active duty women and meeting their needs as they understand how much it means when they receive them.

The Sarah Polk Chapter also partakes in numerous veterans events throughout the year. At Christmastime, DAR members participate in Wreaths Across America, where they sponsor or volunteer to place wreaths on the graves of those who sacrificed their lives in memorial cemeteries throughout the country. This year on Dec. 14, local DAR members will place their wreaths at the Middle Tennessee State Veterans Cemetery. Their largest event falls on Veterans Day. After Franklin’s Veterans Day parade, veterans and families of the American Legion Post 22 gather for a luncheon hosted and served by the Sarah Polk Chapter members. This gives everyone a chance to convene and socialize over great food as well as give thanks.

The Sarah Polk Chapter meetings correlated well with Aubrey’s busy schedule, as it is the only Tennessee chapter to meet on weeknights. At the meetings, members discuss relevant topics, from education issues to women’s health, and invite guest speakers who complement DAR’s mission. In February, country music singer Keni Thomas spoke about his experience as an Army Ranger in the movie Black Hawk Down and then performed for the women. The Sarah Polk Chapter nominated Keni for the Outstanding Veteran Volunteer Award, and he won in 2017. The DAR recognizes, admires and learns from the heroes of our country who continue to prove their leadership. At the end of the meeting, the Sarah Polk members get down to business and make motions to fund or assist with new projects.

At the state level, the Tennessee Society raises money for Honor Flight so World War II veterans can travel to Washington, D.C. to visit the memorials. Over the years, hundreds of veterans have had this incredible opportunity to be honored and seek closure because of the Society. When it’s time for a local send-off, the Sarah Polk women go to the Nashville airport to support them and donate snacks for their journey. The Tennessee Society also fundraises for the Tennessee Fisher House Foundation in Murfreesboro and makes sure the homes get the proper maintenance, while the Sarah Polk women help keep the properties beautiful by planting flowers.

Every DAR member is a descendant of anyone involved in achieving America’s independence during the Revolutionary War. With some genealogy research from Aubrey’s father, she was able to join and ultimately discover a new group of friends.

“They’ve really become family for me because I had no family here in Tennessee. They have been so generous with me just as when I was serving,” Aubrey says.

The women threw a baby shower for her and then a birthday party for her son.

Despite some common misconceptions, Aubrey says, “I can tell you that as a 34-year-old half Korean veteran, daughter of an immigrant, full-time worker and mom, we are a diverse group.”

Aubrey is one of many DAR members dedicated to making active duty military and veterans feel appreciated by giving them the care they deserve. The projects and events the state society and local chapters create reach military members far and wide. Though many projects the volunteers of Daughters of the American Revolution accomplish are completed out of the public eye, the military men and women and their families will be forever thankful for their unconditional support.