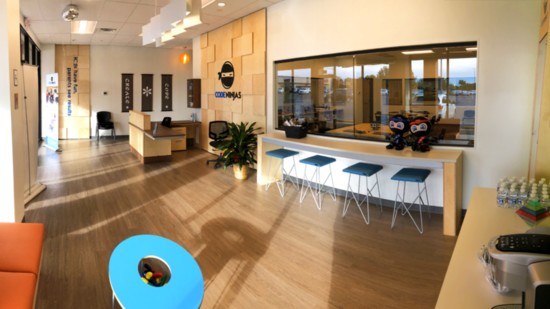 The Dojo with the Mojo

In our digital age, knowing how to code is like possessing a superpower. Clearly, it’s a skill most parents want their kids to have. But parents also want their children to thrive socially. Learning to code involves hours of screen time, and raising a "screenager" rightfully concerns parents.

Enter Code Ninjas, a unique and effective coding concept for kids that not only brilliantly creates quality screen time but does so in a collaborative way. At Code Ninjas, kids engage in productive screen time by learning to code the creative worlds their inquisitive minds are already imagining and do so among an affirming community of fellow coders.

The model is achieving phenomenal success. Code Ninjas started with two locations in January 2018, but more than 400 are set to open nationwide. August and Jeff James, a couple inspired by their son Evan’s love of computer games and coding, launched Franklin’s Code Ninjas last October.

The curriculum introduces programming through Code Ninjas’ Game Development Platform. Just as martial arts has levels of belts, so too does Code Ninjas. Here, the belts take the form of wristbands that serve multiple uses. The colors represent a coder’s level, and a chip inside allows each ninja to check in at the desk and automatically pull up the appropriate challenges. As kids complete projects, they “belt up,” changing the color of their wristband along with the ritual of breaking a board with their feet and ringing a gong.

“The kids’ faces beam with pride and confidence when they finish a belt level,” Jeff says.

To help meet the challenges inside the dojo—an inviting room full of computers and engaging STEM activities—Code Ninjas employs high-achieving high school and college students as sensei, the teachers in a martial arts setting. It’s a brilliant hiring strategy. The elementary and middle school students naturally look up to the high schoolers and undergrads.

“Our teens connect on a peer level with our kids,” August says. “The sensei work through the curriculum with the kids as guides and mentors, helping when they get stuck and high-fiving their victories.”

The sensei-to-student ratio is 8:1 and, to keep things fresh and to build relationships, group challenges and strategy games are woven into the dojo experience. It is all part of Code Ninjas’ ethos to create a community where coding kids can play and grow and thrive.

“We encourage thinking outside the box, even failing at times, to spur their innate creativity,” Jeff says. “It’s exciting to see them blossom when the light switches on and their imaginations start to flow.”

Parents are very much part of the picture, too. First is the transparent pricing with no contracts or hidden fees. Everything is month to month. When a project is completed, parents receive an email in the Parent Portal. Click it, and a parent steps into a world his or her child has created.

“We are very intentional about having the parents participate in the process.” Jeff says.

Parents are welcome to watch the educational action as well. Code Ninjas offers a comfortable parent lounge with complimentary coffee and Wi-Fi and a ringside view through the glass partition of the dojo.

“Most of our parents have integrated Code Ninjas into their weekly schedule,” August says. “They feel confident leaving their child in the dojo and frequently plan their errands around their session.”

Cindy Hamilton is one such parent. Her son, Will, is one of the most dedicated ninjas.

“My son loves Code Ninjas!” she says. “He has a positive experience each time and has found his 'tribe' of like-minded kids. The staff is terrific and really wants the kids to succeed.”

Code Ninjas’ ongoing, year-round drop-in program offers flexibility to accommodate the unexpected twists and turns of busy schedules. There are three options: the Lite program, which offers four hours per month; the Standard program, which offers eight hours per month; and the Fast Track option of 12. Seasonal camps, including Minecraft, Roblox and app building, are also offered throughout the year.

As for Evan, age 11, he is already close to earning his orange belt and evinces an undiminished passion for coding.

“It really helps me express my wild side!” he exclaims, referring to how he has developed the skill to bring his vivid imagination’s characters to life on a computer.

All his new friends would no doubt agree with the sentiment.

Screen time just doesn’t get any better than this.